This ends my second month of the 2013 Goodreads Reading Challenge and I am happy to report that I am 9% ahead of my goal! My little widget tells me so.

Just a quick observation here that makes me curious about my little widget's calculation.  I will freely admit that I am not a wiz at higher math so you mathletes out there should have fun with this at my expense.  I have read 5 of the 20 books that I challenged myself to read, that means I have read 25% of my goal. My little widget and I agree on this one.  My little widget tells me that I am 2 books ahead of schedule, which to me would be 10% ( 2/20). My little widget likes to say that answer is 9%.  I am assuming that there is some very nifty Goodreads algorithm that incorporates number of days of the year that have passed and remaining days to read, but I don't have the time or the inclination to figure it out.  I don't even know why I am talking about this after all this is about Goodreads not Goodmaths!

So, the two books I read in February had some similarities (both about children, both had some historical qualities, both by authors with names beginning with R, both award winners). But my experience with each book was very different from the other. I first chose to dig into the award winning Midnight's Children by Salman Rushdie.

This book won the Man Booker Prize in 1981. And then it won the Best of the Booker in 2008, crowning it as the greatest of all the Booker prize winners in the 40 years of Booker history. This was to be a good book! The synopsis sounded interesting: an Indian child was born at the stroke of midnight on the very night that India gained its independence. This child's life and India's independence would mirror one another through events, national and personal. A clever weaving of fiction and fact, and I would learn some world history along the way.

Like many wonderful books, the story has loads of engrossing characters with interesting back stories. The historical accounts of actual events during India's struggle for independence through the eyes of Saleem and his family was a neat trick. Undeniably, Rushdie has a gift for description. So, the book has lots of great qualities. But I could not follow the narrator's meandering style which was dotted with large jumps in time forward and back. I totally claim this as a personal problem; clearly it's not the book fault (remember it's the best of 40 years of Bookers).

So I did what I used to never be able to do. I stopped reading and said goodbye to Midnight's Children. Life is too short to read books you don't enjoy. Is that already a bumper sticker?

In defeat, I retreated to where everyone who feels beaten by a highbrow book goes: teen fiction. And the straight to teen fiction bestsellers to boot. On recommendation from two of my friends (one a middle school media specialist and the other a media specialist in training), I selected Miss Peregrine's Home for Peculiar Children by Ransom Riggs. 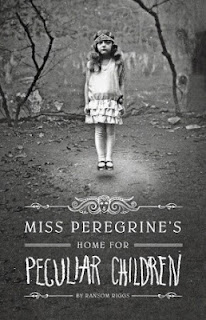 This book was just what I needed to clear the heavy descriptions and complicated world politics left in my head by Midnight's Children. The Peculiar Children have paranormal abilities, they time travel, they  fight monsters, they cheat death, all under the cheerful backdrop of WWII. No heavy world politics here. Kidding aside, this book has an added feature for those like me who have an interest in photography. The book is littered with unusual and at times creepy photos that the author gathered from various antique photography collections. He weaved the photos into the story to illustrate the plot. The only criticism I might have about this is that at times his use of a particular photo seemed to force a part of the story. It is as if the author was dead set on using a certain photo and wrote a part of the story to fit the photo. It felt forced at times.

Other than that I enjoyed the Peculiar Children much more than Midnight's Children. And it too is an award nominee, included on the Young Adult Library Services Association's 2012 Top Ten Teen Fiction. Highbrow enough for you?

So closes the book on my February reading. One thing has occurred to me as I wrote this post. I admitted to not finishing Midnight's Children but I did include it in my "read" books on Goodreads. The experience of trying to read it felt like I deserved to get credit for it somehow.  So did the math people behind the curtain at Goodreads know that I checked off an unfinished book? If so, how? Is that why my little widget reflects 9%? The algorithmic folks may have a little paranormal ability themselves...

Email ThisBlogThis!Share to TwitterShare to FacebookShare to Pinterest
Labels: goodreads