Self-talk from the Gutter

My own mother has told me many times that being a parent is the hardest thing one will ever do.  But then to lessen the magnitude of the lifelong burden of childrearing, she adds her positive spin..."but it is the most rewarding thing too.  Children bring your greatest sorrows and your greatest joys."  No pressure on either party involved, right?

I've heard her say this many times and like much of our parent's wisdom, I have disregarded it at times. You know, how you know what someone is going to say verbatim, because you've heard it many times before, so you stand out of their view, mockingly nodding and mouthing the words along with them..."...children bring your greatest sorrows and your greatest blahblahblah.."  At times like those, I can guess from which end of the spectrum my offerings to my parents were coming.

But as with much of our parent's wisdom, I have come to know how right she is on this one.  My two sons are simultaneously the greatest sources of frustration and love in my life.  I have emotions to the extent I never knew possible until these boys came into my life.  Wait.  Are you mocking me?  I thought I saw your eyes roll and you mouthing "blahblahblah".

Anyway, I had one of those moments yesterday with the boys where my parental joy meter was flipped into the high. Unfortunately, the moment was tainted with a sense of dismay.  Here's the scene:  the boys were in the basement playing Wii, some Mario racing game.  I think the volume was pushed to the max as the whole house was vibrating.  There was a brief and sudden silence followed by Son #1 saying to Son #2 in a very raised and authoritative voice, "I never want to hear you say that again.  You do NOT suck!"

Son #2 mumbled something about always losing at MarioKart.  Son #1 came right back with, "But you do NOT suck.  It just means your need more practice.  Or maybe you could choose a different character that might be better for you.  But please never say that again.  You do NOT suck."  I don't know what happened after that other than the noise level of the game came right back on and they continued to play for a few more minutes.

Son #1 came into the kitchen moments later and I asked him about their exchange.  He said that he didn't like to hear his brother say that about himself because "if you always say you suck, then you will grow up and you will suck.  I love him and I don't want him to suck."  My first thought:  has he been watching "Jersey Shore"?! My second thought: albeit not the language I would choose to express this heartfelt thought, this was a very loving and profound brotherly sentiment.

Language aside, I felt a small victory for my husband and me.  Some things that we have been trying to teach our not always loving boys had stuck.  First, he loves him!  That's not always apparent between these two siblings, but it's there and he said it out loud!  Second, he clearly has the concept of self-talk, self-image, self-confidence down pat.  And third, he's passing it along to his little brother!  A moment of pure parental joy, soured slightly by guttermouth.  We'll enjoy our spoils and work on that one another day.
3 comments:

Taking Up My Own Challenge 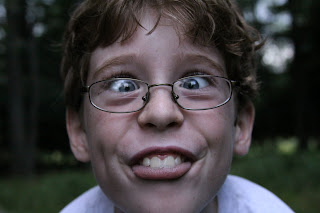 I leveled a challenge yesterday to anyone relaxed enough to take it: be a kid, look for a joyous moment and seize it, stop being so darn serious! Did you do it? Could you do it? I did. Here are a few things I did yesterday to make sure I got a little bit of kid back in my day:


Let me know what you did to enjoy your day!  Happy Toady Today!
4 comments:

Kid for a Day

Pure joy...have you felt it lately?  If you are an adult, my bet is that it's been awhile since you felt pure joy.  But kids live there.  Try to be a kid today...if only for a minute. 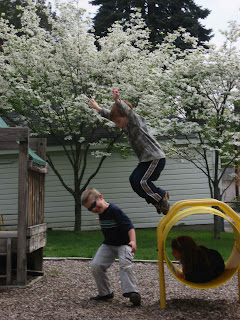 Focus, focus, focus. That is something that I say frequently to my sons. Whether it be about something as mundane as putting on their shoes or the attention they pay to their homework, focus is a theme in our house. Or lack thereof.

The subject of my own focus was brought to my attention today and I thought to rate my performance. Am I focused? On what do I focus? Are the things that have my focus important? Answers: Not always. Too many things and not enough things. Some but some not.

I find that I go through phases where I will be very focused and productive in all aspects of my life, juking along, getting it all done. Then I will hit some stumbling block, in a single area, and it will upset my rhythm altogether. My rhythm has been off for a while but I feel the beat picking up, I'm stepping back into the flow and it feels nice.

So I can start my focus here.. 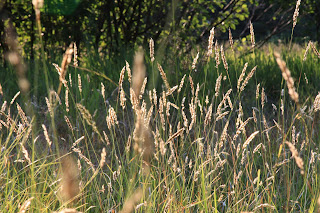 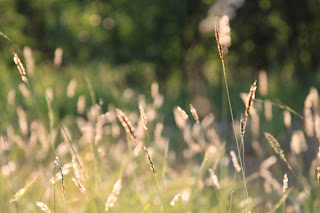 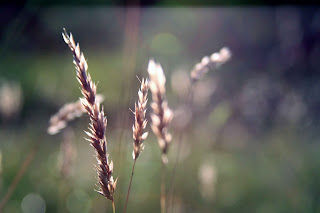 ...and it looks nice from all points of perspective.
1 comment:

I know I left you last on the edge of your seat, just waiting to see what imprint Sticky Chicken would leave on his visit to DC. Unfortunately, Sticky Chicken didn't get an audience with the President or even Pelosi, but he did have a fantastic time playing tourist.

The day started on the Metro. A quiet, uneventful ride for most, but being poultry, it was quite exciting for Sticky Chicken. He's used to being cooped up, you know and just getting out of the peck and scratch of his day-to-day was a thrill to crow about. Here he is enjoying his ride. 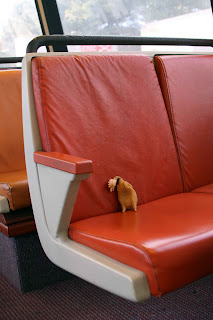 He loved the window view of the work-a-day world rushing by. 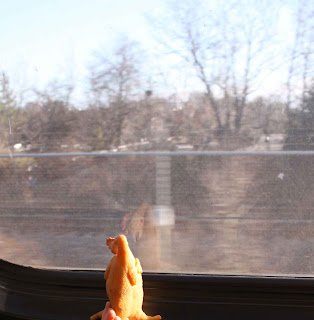 Sticky Chicken visited the Smithsonian Museum of Natural History first. He just had to see his ancestors, so off to the Hall of Paleobiology we went (you know, birds are descendents of dinosaurs). Interestingly, he seemed most fascinated by the megalodon. Did you know that a prehistoric great white shark was three times the size of a modern one? Did you further know that the prehistoric shark's teeth were almost as big a Sticky Chicken? The things you can learn at the Smithsonian! 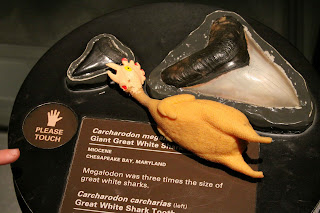 As is usually the case, the Natural History Museum was very crowded, it being a holiday and all. Sticky Chicken got a little anxious in the crowd and started having a bit of a panic attack, most likely spurred on from stories about crowded, confined spaces that he'd heard from some of his fowl family. He started clucking something about the crowd and Jim Perdue and then began running around like a chicken with his...well you know.

Clearly, Sticky Chicken had had quite enough of prehistoric creatures and crowds so we headed next to the Museum of American History. This was much better, fewer people, smaller exhibits. We saw many amazing inventions, an impressive toaster (yes, that's what I said) collection from the 1920's and 1930's, and the evolution of the light bulb. 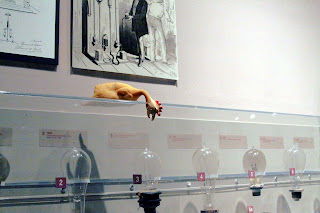 As Sticky Chicken points out in the image above, the screw-like base of our light bulbs today looks almost identical to the ones Edison fashioned. Interestingly, not much has changed in that area.

But the highlight of the day for our little friend was found in the Popular Entertainment collection...Dorothy's Ruby Slippers from the Wizard of Oz. I've never seen a chicken so excited over a pair of 70 year-old sequined shoes! The line to see the shoes was quite long and I worried for a moment that the Perdue flashbacks might start up again, but Sticky Chicken courageously winged his way up to the plexi-glass case and ogled those shoes. Strange behavior, don't you think, for a chicken, especially one without feet. 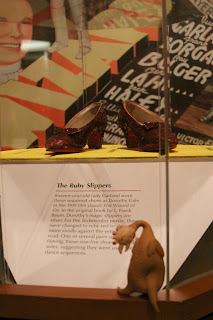 A New Year, A New Addition

Forgive me Bloggers, my last post was 35 days ago.  I don't know where the time has gone, but I hope to never let that happen again.  Now that I am absolved, I can start afresh. 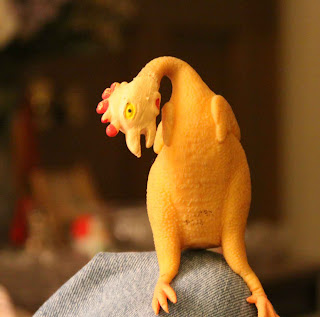 The upshot of it all is that Sticky Chicken is a blessing and a curse. When he's with us, he'll travel where we travel, do what we do. He'll occasionally appear in family photos, partake in family events. Then we pass him back from whence he came...the boys' prankster cousin A. This is the blessing part - giving him back in a most unsuspected way, stashed into a suitcase, slipped into a handbag, tucked into a coat pocket.

The curse part is knowing that some day, somewhere, when our guard is down and our memory is failing us, Sticky Chicken will come back to us in an equally surprising manner.

I have to report some unfortunate news about Sticky Chicken. He had only been in our possession for about 8 minutes when, I can scarcely say it, he lost his feet. Yes, in a matter of seconds, Sticky Chicken became a double-amputee. It was horrifying. My youngest son was harmlessly (or so we thought) holding Sticky Chicken by both feet, chicken legs stretched apart, while spinning his sticky body, winding it up tight at the ankle. Unexpectedly, Sticky Chicken flew through the air, permanently severing the connection between legs and feet. My son was left stunned with Sticky Chicken's feet in his hands. Looks like he might be on the fast train to oblivion, just like Sticky Lizard.

In the meantime, aside from his injuries, Sticky Chicken is well. He enjoys lazing by the fire, watching YouTube videos and is thinking about getting on Facebook. 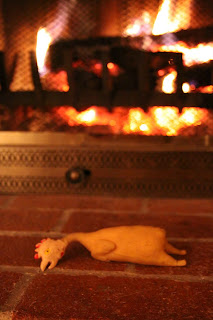 And he is looking forward to his first trip with us, to our nation's capital on Monday. Who knows where he'll appear...
6 comments: