Rainbows lack practicality. They serve only to give us brief moments of awe and appreciation if we take the time to notice. In that way, they are much like vacations. We spent much of our vacation chasing rainbows, not in the pursuit of the impossible but in the touristy, Niagara Falls way.

We visited on a beautiful sunny day. The only humidity in the air was that being produced by the Falls themselves: the infamous mist. On sunny days at Niagara when you are positioned at just the precise angle, you perceive a phenomenon emerging from the mist: a rainbow. 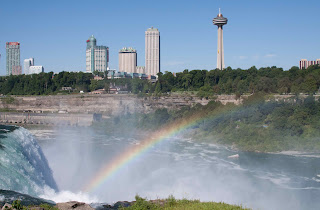 If the grandeur of the Falls alone isn't enough to stop you in your flipflops, 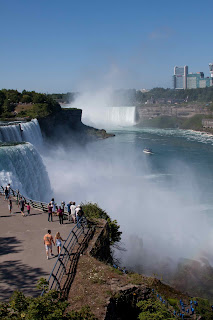 the added bonus of a rainbow should do it. 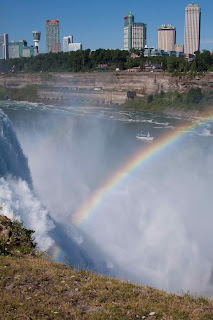 Not impressed yet? How about a double rainbow! 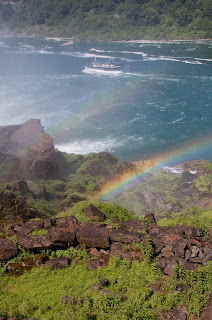 ﻿
I found out that you don't have to be positioned at just the precise angle to be party to the rainbow phenomenon at Niagara, as you can see from the selected images I've shown here. The day we were there, you could walk along the American Falls overlook and follow the rainbow all morning.

Just so you know, I took around 150 pictures our first morning at the Falls and I estimate 100 of them included rainbows. I may have gone a bit overboard. Count yourself lucky to only have to see 3 of the 100 shots. Even I was getting a wee bit tired of the things around shot 98. As a photographer slightly obsessed with light, the challenge of shooting the visible light spectrum and capturing the most vibrant rainbow was nearly too much for my family to handle. They actually deserted me at one point because I wouldn't move forward from my vantage point. They apparently wanted to see more of the Falls.

Rainbows at Niagara make you do crazy things. Take this young man for instance proposing to his sweet young love right in front of us and several hundred other tourists at the base of the American Falls. He was crazy in love and I am sure the rainbow pushed him right over the edge. Or he had been planning this for months and the rainbow made it just that much more perfect. You decide. 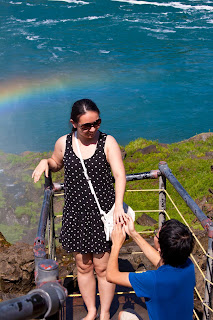 I'm glad she said, "Yes!" or we may have witnessed a suicidal, man-in-a-barrel stunt over the Falls. I imagine this is the last thing a man in a barrel might see right before his life flashes before his eyes. 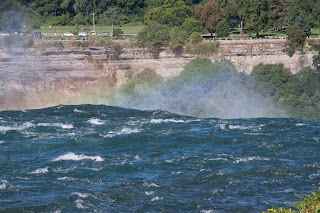 I wonder if my hypothetical barrel rider would have noticed that faint rainbow he was about to pass through?

I wasn't prepared for the awe inspiring views the Falls offer. I had been there once in high school but my memories of that trip are as foggy and socked in as that winter day in the mid 80s. That's me on the upper right in the back. And that's a big honking slab of ice on the far lower right. Who goes to Niagara in winter?? 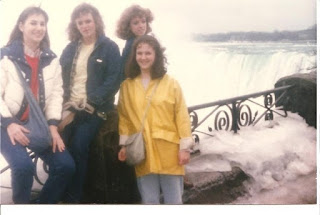 That day in the 80s (years not temp) was not the best Falls viewing day, being rainy and oh so cold. We were only in the area for a few hours and had to take in whatever sights we could. That day, visibility was limited to a few feet and the only real sense of the grandeur just beyond the mist was the thundering sound of the rushing water. It sounded immense.


And speaking of thunder, the sound of approximately 750,000 gallons of water per second rushing over a 170 foot drop is well...thundering.﻿ That's about 1.4 million 2-liter bottles of Canada Dry Ginger Ale per second being spilled over those of you who need a practical example to relate. 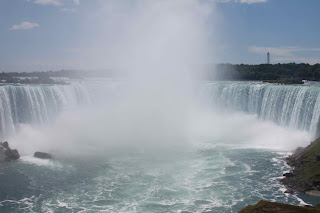 We stood right next to the base of Horseshoe Falls. That's us in the yellow. 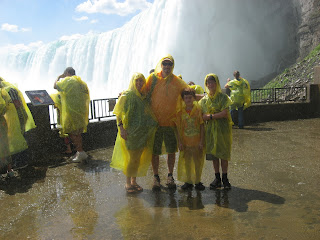 We know that this is on the Canadian side not only because of the yellow ponchos but we remember this picture was taken shortly after the cavity search administered upon entering the Canadian border......
Just kidding!

Seriously, if it were the American side, we'd all be in blue. 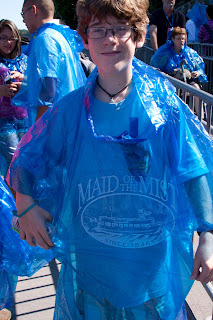 Another thing that makes the Canadian side better is that they get a full view the American Falls from their side of the river. We only see the Canadian Falls at an odd angle from American soil. 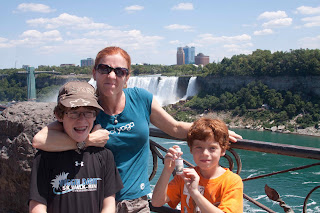 That's the Canadian view of American Falls in the background. As an aside, there is so much water flowing over these falls that the Canadians actually bottle it, as Helios expertly displays above, and sell it for ﻿5 loonies. So as to not lose out on any tourist commerce, the Americans also sell Falls water on our side for $5.00 in U.S currency. I like the Canadian term, loonies, for their dollars. If our economy keeps following its recent course, maybe we should adopt the term as well for our dollars. When numbers get too far into the trillions, it all seems loony to me.

But I can forget about all sorts of unpleasant things and find awe and appreciation, when I think back on our family Niagara vacation and our very real pursuit of rainbows. 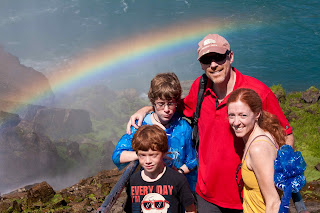