The boys discovered a new hobby recently and we have the Boy Scouts of America to thank for it. Their newfound obsession is archery.  At Cub Scout camp earlier this summer, Helios shot like a boss with three bull's eyes to show for it. 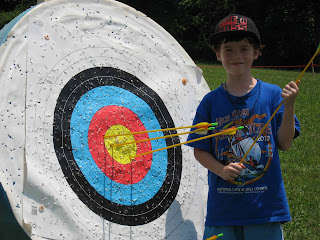 Just last week, Leonardo earned the Archery merit badge at Boy Scout Camp. There are no pictures to prove it as I was not allowed to go to camp with him and snap shots of his every move. I really don't know why.

To capitalize on their enthusiasm about archery and in an effort to pry the boys' carpal tunnel destined hands from the sundry keyboards, remote controls and joysticks (do they still call them that?), we made a small investment in this new outdoor activity. Believe it or not, it was our first trip to Dick's Sporting Goods. 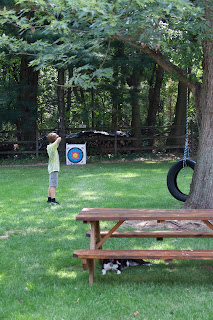 We have a nice sized lot that adjoins private woods allowing for a safe range area in the back of the yard.
With safety in mind, we placed the target such that any overshots will neatly hit the woodpile. If an errant arrow happens to make it past the woodpile into the woods, the only thing that might get hit would be something or someone that shouldn't be there anyway. Creepers, you have been warned. 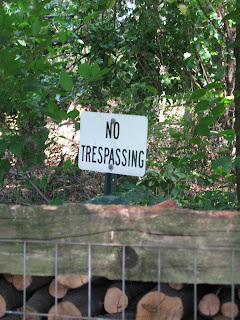 As I said, I have the BSA to thank for this new hobby. And I am not being the least bit sarcastic. I thank the BSA for impressing upon my boys the importance of range safety. The boys are treating our backyard range like a proper range, calling out range commands and following the safety rules of shooting and retrieving arrows. They are calling out one another if one bends the safety standards even a smidge.

The BSA is not only responsible for teaching my boys how to shoot but also for teaching them what they need to know about archery equipment. My kids like to know lots of details about lots of things and the fact that they can teach us archery jargon makes them very happy. We have all learned fun new terms like "nock an arrow" and "flu-flu fletchings". And of course, who doesn't love yelling, "Commence Shooting!" every now and again?

Finally, I especially would like to thank the BSA for teaching them proper care of their archery equipment. The boys have been impressed with the notion of taking good care of  their new, somewhat expensive archery gear without my husband and I having to say a thing. They are caring for their gear with the attention of OCD sufferers. Thank you BSA for insuring our investment.


Lest you think we are something we are not, let me clarify. We are into archery in the Geena Davis way rather than the Ted Nugent way (or a Katniss Everdeen way, if you are going to insist I be current). By that I mean, we are into archery for the skill of it rather than for the meal of it. We are not hunters and have no issue with those that are. But we and the boys only plan for archery to be a backyard pastime. But then again, it might be nice to see one of our guys in the 2020 Summer Olympics. Training begins now! 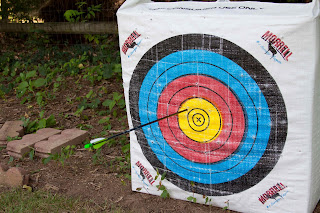