What To Wear to a Tractor Pull

It's Fair time again in Frederick. I didn't grow up around agriculture or animal husbandry or bake-offs, so the Fair experience is still novel to me. Here the Fair is hugely popular. There is even a sanctioned day off from school locally known as "Fair Day" where every kid in the county is out of school. I have an issue with that. I support the ag and 4-H kids involved in the fair having the day or even the entire week excused from school. But not every kid needs Fair Day off.  I guess the rationale is that if the kids have the day off from school, they will go to the Fair and learn about the animals and farming. Not so much. Have you seen the midway? That's where they want to go. So it's really about commerce. And that's fine; my kids go to the midway. But not when they should be in school. We've always avoided going to the Fair on Fair Day. Most of the people I know avoid the Fair on Fair Day. I'm not alone in this but still only part of a minority. They tried to take Fair Day off the school calendar at one point and many folks got really upset. So this Friday is Fair Day...and when in Rome...
But I didn't come here to talk about my opinion of Fair Day. I came here to talk about how every year we go to the Great Frederick Fair  and learn something new.﻿ As I said, I didn't grow up with a vast fair experience so there are many fair related things to be learned. Last year we learned about pigs, sheep and goats and how it's nice to have someone you trust riding a rollercoaster with you for the first time. We also took Sticky Chicken with us to the fair last year and learned all about poultry.
This year we decided to go to one of the entertainment events. Unfortunately, Darius Rucker was sold out and our schedule wouldn't allow for any of the other musical options. Our choices then were the Tractor Pull or the Demolition Derby. Our hectic schedule chose the Tractor Pull so off to the Pull we went.
The first thing anyone says to you when you say you are going to a tractor pull is that you better have ear plugs. And they are right. They are so right in fact that the Fair officials have smartly arranged for an army of fair employees to dole out ear plugs as you enter the grandstand. You must have them. It is so loud. Oddly, there were many people in the grandstands without them. I assume those folks had already lost their hearing at a previous tractor pull. Or they were teenagers trying to prove their invincibility to members of the opposite sex. Either way, I found them curious and crazy to be sitting there without ear plugs. We, being new to the tractor pull setting and being ones who enjoy having our hearing intact, used the complimentary ear plugs and our fingers for added protection. 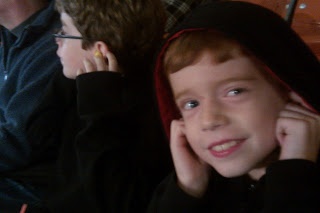 The second thing you must know about a tractor pull is that the only machines you will see that resemble tractors are the actual tractors that freshen up the track after each "run". These are the Zambonis of the tractor pull. They are regular looking tractors driven by regular looking farmer type guys who smooth out the track between pulls. Also there was one tractor that would return the sled back to the starting line after each pull. Aside from that, I didn't see any other tractors.
What I did see were souped up dragsters that had REAALLY BIG rear tires and teeny tiny front tires. Here's a "tractor" (on the left) attached to the sled (in the middle) with the regular tractor (on the right). 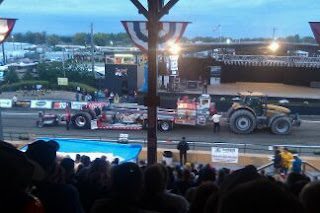 The gist of a tractor pull competition is to see which "tractor" can pull the weighted sled the furthest. There are different weight classes and horsepowers and yadayadayada. It all boils down to big boys with big toys. Or does it? I was surprised that several of the drivers were WOMEN. It seems women's lib and equal rights are alive and well on the tractor pull circuit. Good to know.
I was also surprised to hear the amount of money that people pump into these vehicles. The engine alone in some of them can cost $50,000. 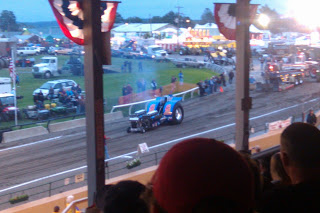 And some of them have two engines. 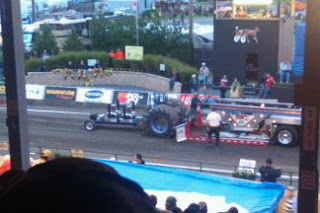 And that doesn't even include the cost of all the other parts that are needed to actually make them the exaggerated vehicles they are. Someone told us these can cost up to $250,000. All that makes me think is that some people have more money than sense. Or at least they have much more money than I have.
I must admit that I had been to a tractor pull before. It was decades ago in high school. I had forgotten about it until this recent tractor pull experience. The main thing I remember about that tractor pull was what I was wearing. I was clearly out of my element then and proved it by wearing white capri pants. I saw no white capri pants this time, mine or anyone else's. I was savvy enough from my previous experience to wear jeans...and ear plugs.