We Are Not Alone

When I talked about my holey t-shirt dilemma, I was not expecting the responses I got. I received several blog comments, FB comments, phone calls, and texts from people with the same t-shirt mystery of their own. No one had identified the Dang Nub as the culprit. After reading my post, each of these folks checked their own vehicle seat belts and all but one have the Nub. Some drive Toyotas, some drive Hondas, both vans and sedans, one drives a Jeep. The one without the Nub drives a Volvo. So maybe the Dang Nub is not solely responsible for causing the holes but the friction of the seat belt alone can weaken t-shirt fabric. Before the lawsuit is filed, a full study would have to be performed to singularly implicate the Nub or determine if it has accomplices.

I did find the explanations that the other people had for their t-shirts problems interesting. Several had no explanation, just a sense of frustration. One male victim logically assumed the holes were a result of his belt buckle that he wears daily. One female attributed the holes in her shirts to all the time she spends standing in front of her kitchen sink. Apparently, she leans against the countertop edge at the sink frequently.

I even received a picture of someone else's holey t-shirt as proof of solidarity in this situation. 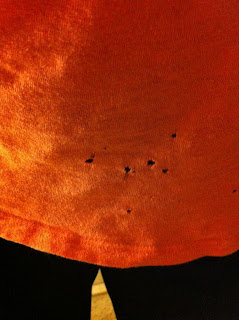 This is the Kitchen Sink Lady. She must have some really dirty dishes or a very vigorous method of scrubbing pots and pans if she's actually ripping and snagging her clothing like this.

Another thing I realized was that the holes of all the victims are in generally the same spot on our shirts - just a few inches above the bottom seam, right around waist level. All these victims are different heights so their waists are at different heights too. The Dang Nub, and its alleged accomplices Seat Belt and Belt Buckle, are the only reasonable explanations for the waist-high damage. Pretty clear cut if you ask me.

My husband has had a few things to say during this mysterious case. Before I identified the Dang Nub, he offered the notion that I might have an egg tooth in my stomach that I was unaware of and it was trying to release something al a Alien style. Nice Honey. Thanks.

He then suggested that we all just pull our t-shirts out from under the confines of the Nub after we buckle up. But that would require breaking a near 30-year habit of how we settle in to drive and establishing a new habit. You can imagine how hard that would be. But I've been doing it. One drive at a time.

This is not the end of the t-shirt caper. I am sure others with feel strongly enough about this injustice to come forward especially now that they too know that they are not alone.