What do you get when you have two boys who are/were both Cub Scouts, who both either have made or will make a Pinewood Derby car for every year of the five years in a Cub Scout career? The answer: no good way to store and display ten Pinewood Derby cars. 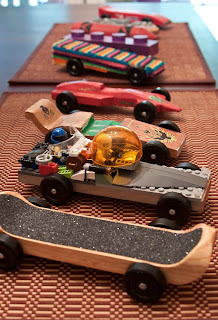 If you search, online or hoofing it around town, you won't find a way to store and display all five Derby cars for a Scout. You can find individual display boxes for a single car, but they are plastic and bulky and who really wants five, bulky plastic display cases? You have to have a fairly large shelf area for all those and that then creates another storage and display nightmare.

So what's a Cub Scout parent with a slightly compulsive organizational bent to do? Make your own custom shadow box.

That's what we did this weekend. It was fairly easy and I'll show you how we did it. I didn't take pictures from start to finish. I remembered after about three steps in to take pictures but you haven't missed much. We (Hubby and I) started with two purchased 12"x12" shadow box from Jo-ann, Etc., 3 feet of shoe molding from Home Depot, a few wooden cubes, wood glue, and black spray paint. 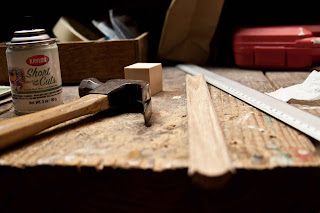 Each 12"x12" box needed to be configured to display five cars which each measures 7 inches in length and 2-1/2 inches in width. I won't force you to do the math because we've already done it. You'll see how that configuration works out but you'll have to wait until later. After we measured, cut and painted, this is what the project looked like. 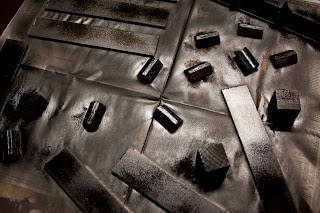 We cut the shoe molding into sixteen 1-1/2 inch segments. The long flat pieces came with the purchased shadow box frames as spacers. We cut those into six 8 inch segments and left two uncut at 12 inches. Next we started gluing the pieces together to form our custom shadow box shelves. 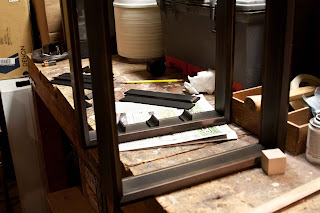 You probably haven't been able to fully concentrate on the previous steps due to that math problem swirling around in your head. So I'll end your distraction by showing you the configuration. 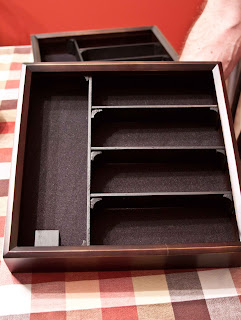 Each horizontal shelf is eight inches long and they are spaced vertically, three inches apart. The single vertical segment ﻿is four inches wide. The shoe molding segments serve as shelf brackets and a lone wooden cube makes a pedestal for a single car.

And here are the finished products. 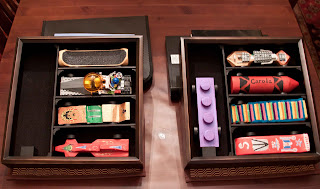 I bet I could sell these.﻿ 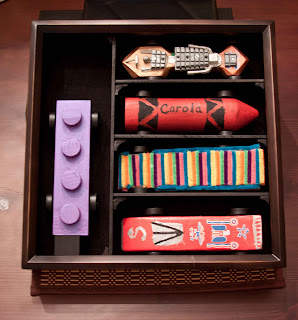 Or at least the idea. 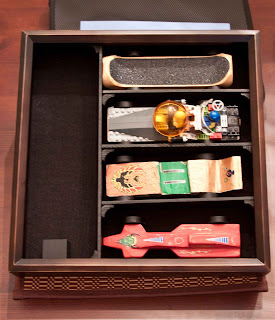 I know the Cub Scout parental market in a small niche, but how much do you think they'd be willing to pay for a custom shadow box to display their child's handiwork?