No trip to The Peaceful Side of the Smokies would be complete without a drive through Cades Cove. And no drive through Cades Cove would be complete without some wildlife sightings. The Cove is full of deer, wild turkey and sometimes black bears. In the almost forty years that my family has been visiting the Cove, we've seen countless deer and turkey. As for the bears we have seen in those forty years, we can probably count all of them on a few hands. We can definitely recount the stories surrounding those bear sightings.

Like the time we were driving through at dusk, late dusk and were almost at the end of the loop. We were just about to write off that trip through the Cove as a disappointment (read no bears) when we looked up in the trees overhanging the road to spy a few bear cubs clinging in the branches. They were likely waiting on Mama Bear to return. We were happy not to see her and more than thrilled to see the cubs high above us in the branches.

And then there was the time in the Cades Cove picnic area when a big black bear decided that our lunch smelled good enough to investigate. So she ambled over to our table as we quickly jumped in the car. We watched from the safety of our car as she sliced open a box of Teddy Grahams (honey flavored I think) with her foreclaw and munched away. A bit ironic, don't you think?

And we can't forget the black bear who walked right up on the cabin porch and interrupted my brother and sister-in-law enjoying their morning coffee. They were between the bear and what at one time had been the location of his favorite breakfast trash can. The bear waited patiently while my brother and SIL arose from their rockers in a nonthreathening manner and slipped inside the cabin. We all watched from the windows as the bear surveyed the porch, found no breakfast and made his way to the cabin next door. That was a close one.

Another equally terrifying bear sighting for us was one last summer. On Wednesday and Saturday mornings, the Cove road is open for bikers and pedestrians only. Hubby and I had taken the boys and all of our bikes for a ride around the loop. Hubby and Leonardo had ridden ahead while Helios and I rode behind at a slower pace. As Helios and I rounded a curve, we saw Hubby and Leonardo pointing to the right into the woods and making excited, insistent, slightly panicky faces. They were making no noise but motioned to us to hurry. And then they quickly turned and rode away from us. As we approached the spot where they had been pointing, we saw a Mama Bear and three cubs sitting just a few feet off the road and literally ten feet away from us. Oh my goodness! I said in the harshest whisper I could muster, "PEDAL!" I never want to be that close to a bear and her babies ever again. Nor do I want a bear that close to my babies again.

That same week the Hubby had ridden through the Cove alone and passed a black bear sitting just off the roadway. He said the bear was close enough to have knocked him off his bike. Do you think the bears are sitting by the road watching for someone stupid enough to stop? I am sure there are more than a few someones passing through that would stop.


Our family has a healthy respect for the black bears and will keep our distance from them. Sadly, many visitors to The Smokies are not so respectful (read are a bit dense) of the bears' home and will attempt to get within swiping distance of a bear. These folks even bring their little toddlers (read morsels) up close and personal to these bears. We have witnessed many bear sightings when the tourists get very excited, forgetting that these are wild animals and approach them....in droves. We usually just drive on by shaking our heads and hoping not to read about any of the tourists in the paper the next day. One such occasion was too much for our own Mama Bear to handle. She couldn't just drive on by without letting the throngs of bear paparazzi know what she thought of their actions. As we drove by, my mom screamed from the car window, "Leave the bears alone! Leave the bears alone! Leave the bears alone!" I don't have enough room in this blog post to list the number of times she chanted that phrase but just know that phrase was ringing in many ears that night, both human and bear alike. I suspect there are families all over the nation that retell their own version of this story about the crazy, screaming bear lady hanging out of the back of the station wagon.

And now we have another bear story to add to our repertoire. This one is safe and not too exciting. But it still goes into the Bear Count. Yesterday we took another spin through the Cove and spotted four bears. First, we saw this guy ambling through the pasture. 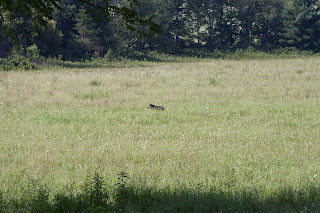 Yes, that is a bear. He was about 50 yards away from us and our large vehicle. Just the way I like my bears. 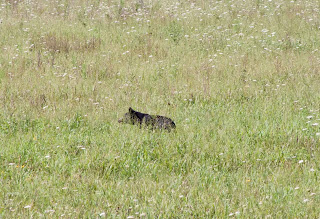 He looks cute from this distance.
Then we went around the loop and saw these bears. 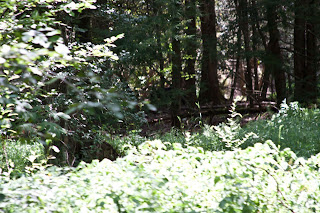 Believe me, there is a Mama Bear and her two cubs back there. They were about 100 yards away from us. Just the way I like them, even better. Let me zoom in for you. 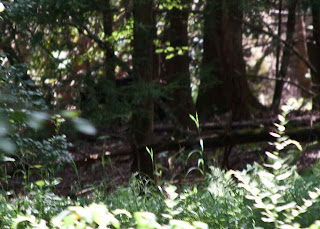 I promise you, they are there. They're black, you know, so they blend in with the shadows.﻿ And wouldn't you know, there was a crowd gathering just loping distance away from Mama and her babies. They were armed with cameras and little children. Luckily, there were several rangers providing crowd control. After I snapped these fantastic shots from the truck window, we drove on by as we always do. You won't be reading about us in the paper.

Email ThisBlogThis!Share to TwitterShare to FacebookShare to Pinterest
Labels: family, The Smokies