Sticks and Stones and Speeding Tickets

My little town has an answer we have been looking for to solve our nation's budget crisis. They have the answer but they are not sharing it. They aren't even hinting at the fact that what they have could be a viable solution to the projected 2012 Federal budget deficit of $1.1 trillion. I am not a student of politics or an economist so forgive any mistakes in these areas. But I think I figured it out and am happy to share my thoughts.

Our little town has installed speed trap cameras in various points across the land. They gave local drivers fair warning that these cameras would be installed, so I guess trap is a strong word. I take that word back. Anyway, the camera will snap a picture of your vehicle's tail end if you pass by its lens traveling faster than the posted speed limit. Citations are then issued to drivers going at least 12 mph over the posted limit. Each citation costs the driver $40. The city retains $31.25 while the remaining $8.75 goes to the outfit who operates the cameras under contract for the city.

The projected annual revenue is $450,000. The city is well on the way to meeting its projection as evidenced by the fact that in the first four weeks of camera operations the city netted $216,000 in ticket revenue. A great start, wouldn't you say? They do estimate that the revenue stream will slow down over time just like the cars as drivers change their driving behaviors. I got all this information from this little article.

My household has contributed to the city speeding revenue. We arrived home from an extended vacation to find three citations in our mailbox. That's $120 out of our family budget. There are two drivers in our household. I won't say who got the tickets, but let's just say I didn't get all three of them. I just got most of them. And unfortunately, we suspect there may be more citations for us in transit since two of the cameras are conveniently placed on two of the major roads exiting our neighborhood.

Just as an aside, so you don't think my husband and I to be unusual in our driving habits. I know specifically four other households in my small circle of friends who also have received mulitple citiations. And there are probably others of my friends who have received citations that I don't know about. So we are normal.

Speeding is not a good thing but most of us do it from time to time. These speed cameras have had their intended impact on us at least. We are trying to drive slower...especially on the segments of roads where the cameras reside. I am even using cruise control on these in-town roads to maintain proper speed . I had never set my cruise control as low as 25mph until recently. And I am also traveling these camera-equipped roads less if I can avoid them. So the intended outcome of changing drivers' behaviors has worked, at least in my case.

So what does all this have to do with the finanical pickle that our country keeps finding itself in? The nation could do the same thing that my town has done and in a relatively short period of time reduce the budget gap. Of course, we already have speed limits on our roads but this new national program would be an additional plan and the resulting funds would go directly to our national coffers. The numbers are too interesting to ignore.

Let's assume President Obama started a similar speed citation system nationwide. Assume a similar 4-week period, use our local revenue facts above, extrapolate them to national levels and assume that each U.S. household receives two citations, the national figures look something like this:


Annualized that is over $91 billion. At that annual rate, our $1.1 trillion deficit could be recouped over about 12 years. That's a similar time frame to what has been tossed around in Congress for certain deficit reductions. We'd also have to assume also that in those intervening 12 years our government would be operating at a zero budget deficit. Ahem.

I know I am simplying things quite a bit here. I haven't considered things like changes in driving habits and their impact on revenue streams. I haven't considered the need to relocate cameras on occasion to capitalize on the element of surprise. These numbers are getting really large and I am certainly out of my league in even discussing these matters. But couldn't we use a little simplification in solving these problems instead of complicating an already very complicated matter with more complications? (Which, now that I type that sentence, reads like a nice definition of what our government tends to do with most everything it touches.)

I would be happy to pay my share of a national speeding citation program if I knew it would contribute to solving our country's financial woes. I've already exhibited my exuberance for our local level plan by writing three $40 checks recently.

A national plan like this would have its drawbacks. Some would not like this idea of a national speeding citation program, finding it in violation of the basic human need for speed or some other such human right. And most of this dissension would fall squarely on the President's shoulders. As the police officer administering our local program stated he is "the most hated man" in our area, likely the President would feel a similar negative response if he implemented a national program. But with his recent approval ratings, I would think now would be the perfect time to set up such a program. 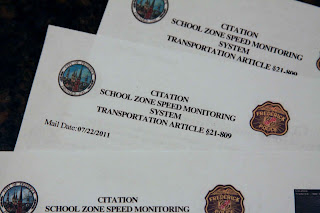