It's a Flashback Friday. I had a few questions after yesterday's post about the Indian names. The questions pertained to the blog names that I use for my boys. So to refresh your memory, here is the original post where I named my oldest son, Leonardo, way back on March 31, 2009.

Names Have Been Changed to Protect the Innocent

I like to keep some of my personal life private on this blog. I don't name names generally. There are few family secrets that I will reveal. I do respect the privacy of those actually in my real life. They could get really mad if I cross certain boundaries. And there's that whole piece where I still don't fully trust what's out on the web and don't necessarily like to think about some of the folks who might be on the other side of these posts. Most of you are fine...but there are some that we should all be worried about. So in the spirit of privacy protection and personal boundaries, I want to give some nicknames to the people in my life so that when I do need to talk about them, you will have a better but still vague idea of who they are. This post is devoted to my first born.

Let's call him Leonardo. One of his heroes is Leonardo DaVinci. Most of us think of art and the Mona Lisa when we think Da Vinci but really he was an inventor, scientist, mathematician, botanist, and so much more. He was unbelievably ahead of his time. I learned all about him from my Leonardo. My Leonardo is the smartest kid I know. And I am not saying that because I am his mother and I have to. He really is super smart. But not in the conventional, rock the 3rd grade, cruise through school kind of smart. He doesn't fit the mold of a model student who gets the high grades on everything in effortless fashion. He only tolerates school. He does get good grades, but he struggles with alot of it. His teachers don't view him as exceptional (in the positive sense) within the public school framework. But this kid knows so much more about anything scientific than most adults will ever know in their lives. Any topic: dinosaurs, the periodic table, fossils, space, space travel, electricity, you name it. And not just knowledge on the kid level. He can explain to you the chemical difference between water and hydrogen peroxide (now that I know that one, it's easy to remember, but the point is my 8 year old had to tell me). And the best part is...he loves all this stuff. He truly has a gift for scientific knowledge and understanding which I believe will take him very far. Set aside all his struggles in conventional education and he will knock the scientific socks (or thermal foot protectors, as he might say) off all of us one day. I wait patiently to see where Leonardo takes us. 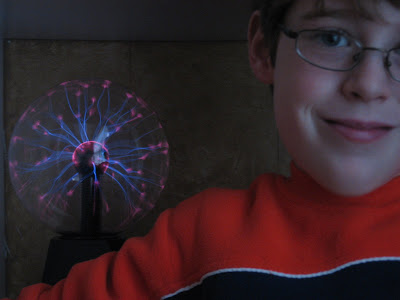 Email ThisBlogThis!Share to TwitterShare to FacebookShare to Pinterest
Labels: boys