Sticky Chicken on How to Make Maple Syrup

Today was an educational adventure for me. I went to the Maple Syrup Festival at Cunningham Falls State Park. The only food processing I was familiar with up to this point is that which is practiced by the likes of Purdue and Tyson. And thankfully, my knowledge of that is strictly hearsay. But after today, I have quite a bit of knowledge of how to make maple syrup. Although it was a terribly rainy day and I had to spend much of our time outside stuffed into the front pocket of my mom's anorak, I still was able to hear most of the demonstration lecture, albeit a tad muffled.

I learned today that the tapping of maple trees for their sugary sap is known to have been done first by the native people of the northeastern part of North America long before Europeans arrived in the region. Once the Europeans arrived, the generous natives showed their new neighbors which trees to tap and how to tap them, then how to collect the sap and boil it down first to a syrup and then boil down longer to a sugar. I wonder how long it was before the European colonists had over-tapped the trees and the natives regretted sharing this information. All that colonization stuff sounds a lot like giving the fox full run of the chicken coop, if you ask me.

But anywho, there was a full demonstration of the traditional syrup making process today. There are no pictures of the tapped trees with the sap harvesting buckets hanging on them because it was raining so hard while we were there. My mom was not about to get her camera wet or walk up a slippery hill just to look at a tree. But take my word for it, they had the trees tapped old-style.


But we did stand under the nice covered pavilion to see the boiling vat. 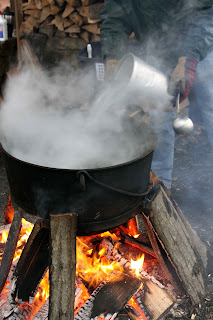 And here's the guy making the taps or spiles as they are called in the syrup circles. 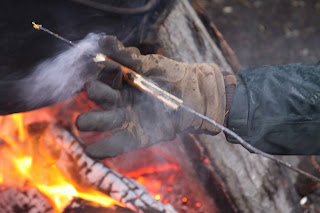 That's a whittled sumac twig he's spearing with a hot poker to hollow out the center. 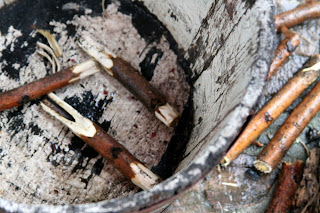 Once whittled and hollowed out, these spiles are inserted into a bored hole from which thick sap drips out to ultimately become the breakfast garnish of choice.
A bird's brain has only so much capacity for history. And we were sick of standing in the rain. So we crossed the road for the real reason we endured the rain anyway...Pancakes with real, honest to goodness maple syrup.  None of that Aunt Jemima, high fructose corn syrup, fake business. This is the real deal. And Cluck! Is it good! 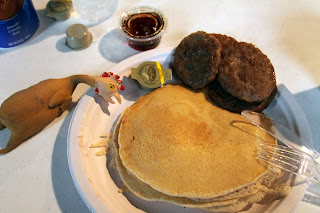 After I ate, I was invited to sit in with the band. So cool! Slim Harrison of Sunnyland Music fame was playing and I got to join in on his really awesome, pimped out washboard! 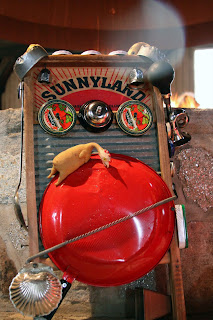 This was way better than even meeting an astronaut!
Another thing I learned today is that it takes about 40 gallons of sap boiled over an open fire to produce about 1 gallon of syrup. A single maple tree produces enough sap in the 4-6 week harvesting season to make 1 gallon of syrup. Not a lot of syrup per tree. This explains why the pint bottle of syrup my mom bought cost $10.00! But again, Cluck! The stuff is GOOOOOD! 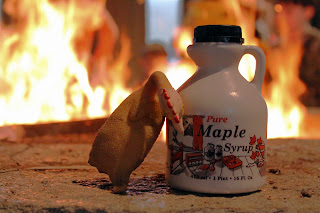