Flashback Friday: The Dichotomy That Is My Sons

It's not very often that I participate in the blogger games, but today I am taking part in Flashback Friday. I am sure someone is doing this somewhere, so let's just say I'm doing it with/because of them. I chose to flashback to exactly one year ago today to see what I was doing and if anything had changed.  I'll tell you at the end what I found out.  Here we were March 12, 2009:

The Dichotomy That Is My Sons 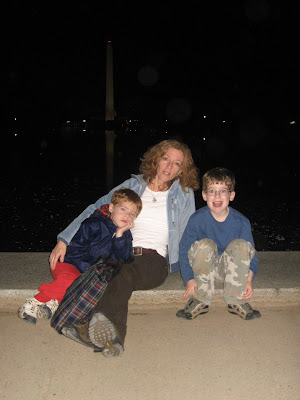 My sons are polar opposites to one another.  Their personalities are so different. These differences don't necessarily pop out at you during the normal course of the day. They share similar interests:  Legos, riding bikes, playing anything StarWars, Nintendo and the like.  But when things get tough (or even a little bit out of the ordinary), their true selves are more exposed.  Take yesterday for example.  My husband has been working longer hours lately and many mornings is out of the house before the guys wake up.  After several days of this, the first words out of Son 1's mouth was "Is Dad still here?"  Upon hearing the disappointing answer, he begins his morning of woe.  Moaning, pouting, the "headache" and the "I don't want to go to school" mantra begin, etc.  This child likes his people around him, not where he can't see them and know they are safe.  Son 2 basically paid no attention to anyone in (or out of) the house and set to rebuilding his Lego from the night before.

After breakfast and the other morning preparations, Son 1 was still distraught about Dad's absence. So we talked. We talked about being supportive and strong during this time at Dad's work.  We talked about how it is okay to miss our loved ones when they are not around, but we still must function.  They want us to. We talked about many things.  So Son 1, pulls it together, decides all is well, and that he will go to school, but he will take with him a "squeezy, stress ball" to assist if needed.  Life can proceed as normal now.

Son 2, hearing this, decides to take some stress relievers with him as well.  His pockets are then crammed to capacity with random Legos and other objects within his arm's reach.  As he stuffs a rock in his pocket, he pats his thigh and proclaims, "Good, I've got my rock in case anybody dies today." Now, I am not sure how the rock would be used in response to an unexpected death, but my five-year-old clearly had a purpose in mind.

As if in slow motion, I look from Son 2 to Son 1 and see Son 1's face change from a calm face of resolve to a strickened look of mortal fear.  I could almost read his thoughts:  "I'm going to need more than my squeezy, stress ball today."  So again, we talked. And, we got back to our happy place.

On the way to school in an effort to keep us in the happy place, I started a challenge to name all the good things in our lives. In order of their delivery, here's the short list of how things in the boys' lives shake out:

Son 2: Being at school

You get the idea. At drop-off, both boys exited the car, in different degrees of contentment:  one knowing that he only had 6.5 hours of torture to endure and the other knowing he had 6.5 hours of rapture to enjoy.  And I drove away to live my 6.5 hours of both.

Okay, how does this compare to the present.

Same: Dad is out of town today & nobody likes it. Different: But nobody's crying.

Same: Son #2's pockets are crammed with Legos, rocks and other detritus. Different: Don't think he is trying to ward off anything with it.

Same: Son #1 still needs have his people around him. Different: No squeezy ball needed to cope!

Same: One son doesn't want to go to school. Different: It's not Son #1.

Same: All three of us are about to enjoy another rapturous, torturous day. But ain't they all that way?