Can this still be considered a Friday Fragments post if I could not get it posted until Saturday? Well that's how it had to be. If I'm breaking a blogging rule by posting this a day late, you can call it Saturday Scraps. Either way, this week was full of tiny bits of many things that all seemed to have something in common: new things with more to come. So this is sort of like a movie trailer...you'll have to wait for the full feature on most of these.

I started a new volunteer position this week. After almost eight years of my kids' primary education during which I successfully and purposely avoided the PTA Fundraising Chairman role, I felt like it was my turn. I willingly volunteered to take on that job for the 2013-2014 school year. In PTA reality, that probably means I'll have that job at least one or two more school years after that too. It could be longer since at least one of my kids will be in middle school for the next four school years. But I have recruited an incredible Co-Chair to work with me and she has several children younger than mine. Thus, her middle school career is at least double the number of years as mine. We have worked out a mutually beneficial exit strategy. She will co-chair for me this upcoming year and then when the time is right, I will co-chair for her as she takes on the lead role. I will also help her target recruit her replacement. Who knew PTA positions required such strategic thinking! This is almost as intriguing as House of Cards, minus the really scummy lack of morals.

In other PTA news, both my kids' schools held their spring Scholastic Book Fairs last week. I love the Book Fairs. I remember as a child bringing home the monthly Scholastic Books order forms and excitedly perusing the book selections. A long ago memory from my own elementary school days came to mind as I was volunteering at the Book Fair this week. I won't tell you the memory now because it needs a full post on its own. But just be warned, you never know what's cooking in the adult bestsellers... 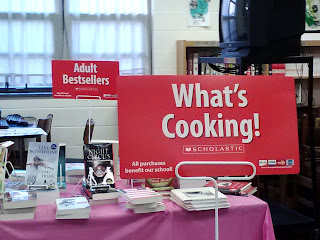 I finished my first full yoga teacher training weekend. Seven more weekends to go. I survived sitting on the floor for an entire weekend. Actually, I survived by finally giving up any semblance of upright posture and alternately lied prone and supine. I expect that I'll have deeper and more meaningful things to say, other than my sitting and lying positions, about the YTT as it goes on. You can only hope.

Come back later for more or stop by Mrs 4444 House of Fragments...