Today we have Friday Fragments and I just have to start by saying I love the image that Mrs. 4444 described in her intro to Friday Fragments today. Go read her actual words. She described your brain being fried with stubborn crusty bits left in the pan. Here is what's left soaking in my pan:

I revived my Twitter account this week. Actually, I revisited it. Seems it has been chugging right along without me, with my blog posts feeding directly to it as they are known to do. Aside from blog posts, I had not tweeted or read anyone else's tweet in quite some time.

I was inspired to get back on Twitter by the administration at my son's middle school. They all tweet. And now I have one other way to know what is going on in middle school....which is nice because my son isn't always sharing the info.

It is amazing how much technology is used in our schools. As proof, I heard a new term this week which pertains to technology in schools. Do you know what BYOD means?  It means "Bring Your Own Device."  Since devices (tablets, iPads, other handheld devices) are so prevalent in our daily livese, schools are considering (and many may already have) implemented policies where students BYOD to use during the school day, for actual scholastic purposes.


BYOD brings up all sorts of issues like equity between those that have devices and those that don't, how to provide devices for those that don't, controlling access to inappropriate content for all, theft, liability and things I probably can't even imagine. Lots to consider.

But like it or not, technology will continue to play a larger and larger roles in our lives and our schools.

Technology even helped G-ma revive her bowling form and competitive spirit over Christmas. 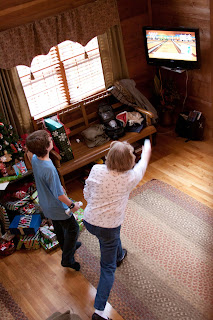 Technology is even influencing the shape of Cub Scout Pinewood Derby cars. Our Pack's Derby is this Sunday and there is one particular Webelos whose entry is designed after a certain vehicle from Bad Piggies.  I think he is striving for the "Crowd Favorite" award again this year or the "Least Like a Car" award.  Maybe this isn't exactly what Don Murphy had in mind in 1953, but there is a lot of craftsmanship and father-son bonding imbued in the making of this particular pinewood car. You'll get to see the final product and much more from the Derby after Sunday. 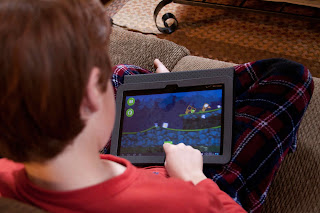