Don't Be Crafty; Be Wily!

I like to think my blog is like an old friend. You know the special type of friendship that is unaffected by time and space. No matter how much time passes between conversations, no matter how many miles stand between you, each time you and your old friend meet, things pick up right where you left off the last time. There is an ease in the relationship; no stilted, getting-to-know-you-again awkwardness.  Ignoring all the time and empty space of late, my blog says to you, "Welcome back, old friend."

So, what have you been up to?

We've been crafty. Only with boys, crafty has a different feel than if you are being crafty with girls. Once my boys hit a certain tween age, they resisted many crafty things. I have learned to be crafty, as in wily, when presenting a project to my boys lest they turn up their male tween noses and refuse. Anything with an element of danger and the possibility of explosions passes their acceptable crafting threshold.

With that in mind, my latest wily project with the boys was homemade firestarters. We made them to give as Christmas gifts to the boys' uncles. The aunts may have thought the gifts were a bit nasty (you can judge for yourself). But the element of "ick" is what made them the perfect wily project for my little men. And the uncles, enjoying a bit of danger and the possibility of explosions themselves, were happy to receive.


If you want to make some of your own, first gather your supplies: 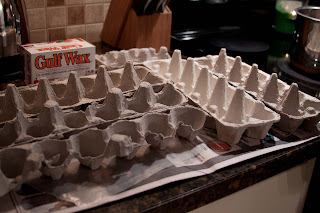 And the element of ick: Dryer Lint 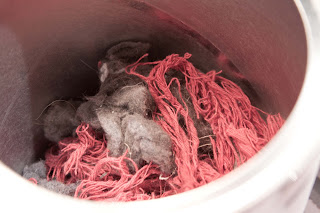 If you don't put too much thought into this, it's really not icky. If you think too much about it, as the aunts did, it could be a bit icky. But I brought them right back to neutral, by pointing out that we only use Family Lint. It would be really icky if we collected our lint from a laundromat and used Stranger Lint. See, Family Lint is not icky at all anymore.

To raise the wily factor, we added to the lint the red strands above which are the shredded remains of a Martha Stewart braided dog chew toy. Martha would be proud. Family dog...not icky.

Now that you have your supplies, begin by melting the parafin over a double boiler. This is where the danger and possibility of explosions come to play. If you don't use a double boiler, the parafin potentially could catch fire. My little Beavis and Butthead were thrilled to hear this. 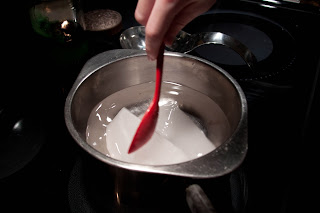 We added a little melted scented candle wax to our mixture just for fun. 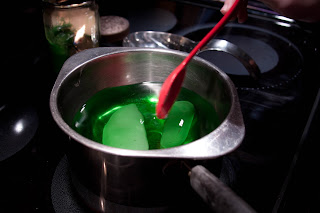 Can't you just hear it..."Fire! Fire!"
Not saying which is Beavis and which is Butthead.
Depends on the day and I love them both, just the same. 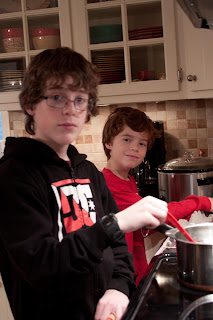 While the wax is melting, fill the individual egg slots about half way with Family Lint. 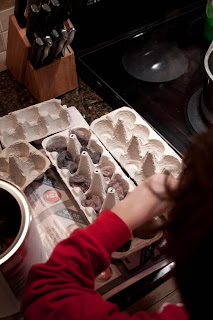 Then saturate each lint-filled egg slot with melted wax. 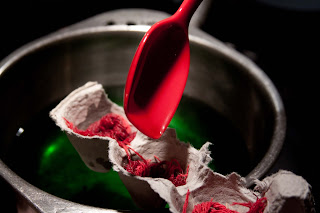 Leave the filled cartons to harden on your countertop that you have carefully covered with newspaper and wax paper to absorb any wax that may leak through the egg cartons. 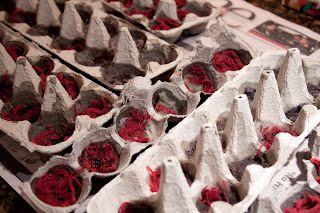 Once the wax has fully hardened in the cartons, break or cut the individual egg slots apart. We put a few dozen in decorative tins for gifts and gave the uncles a reason to play with fire.
See how happy he is? 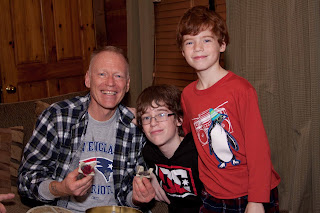 Lastly, to use, place one or two firestarters in your fireplace, chiminea or firepit under your kindling. Light it and watch it burn! 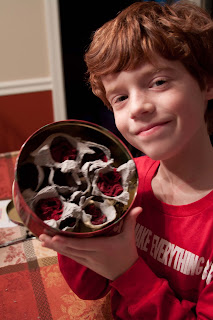