Sunday Schooled - A Bicycle Built for Who?


Today we learn about penny-farthings. 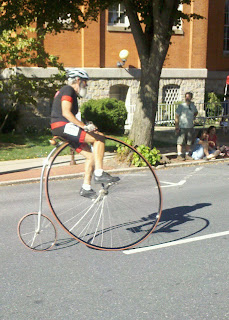 Penny-farthings or high wheel bicycles are what you might think of as the old-fashioned, original bicycles popular in the late 1800s. Their name comes respectively from the British coins of differing sizes, big penny in the front, little farthing in the back. In America, we might have called them "quarter-dimes" but that doesn't have a nice ring to it at all, even if you do say it with a British accent.

Although their popularity was curbed by the invention of the safety bike (similar to current models today) in the 1880s, penny-farthings can still be found. There are associations, groups and all sorts of fanciful folks around the world intent on keeping the heritage of high wheel bicyling alive. Just yesterday, my quaint little town hosted the
only high wheel bicycle race in America. 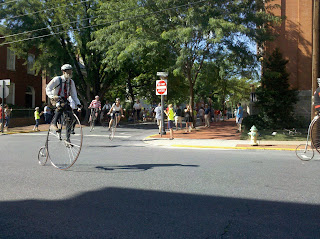 As one of the events in the weekend long Tour de Frederick, The Frederick Clustered Spires High Wheel Race involved a half-mile circuit course through our historic downtown. Riders looped their antiquated looking contraptions around the city blocks to the thrill of the gathering crowd. It is what I would call a spectacle. And it was spectacular.

Apparently, penny-farthings riders are not only unique in their mode of transporation, but also in their fashion sense. Riders wore knickers, lederhosen, argyle socks, jockey silks, and business attire. One female rider finished off her look with black pumps. And yes, there was one rider with a handlebar mustache. 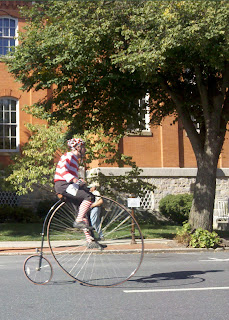 Penny-farthings were a bit dangerous. Way back in the Victorian Era, high wheel riders were falling headfirst over the big penny wheel, many times to their death. Thus the phrase "taking a header" was coined. Cobblestones are unforgiving to those who don't wear helmets. 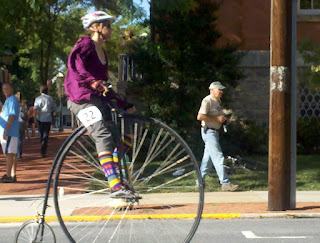 Seeing high wheelers perched atop their machines can only make you smile. Most public events today are centered around serious competition. I am sure that these high wheelers have grand standards for themselves in their endeavors, but I suspect they all have a very healthy sense of humor to go along with their sense of adventure.﻿ I think the word whimsy has to be found somewhere nearby when you talk about high wheelers.