I love a man in uniform. And on my honor, if that man weighs 48 pounds and stands 48 inches tall, I love him all the more. 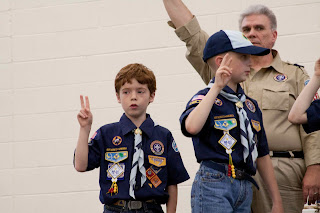 This past Sunday, my youngest donned his Cub Scout uniform to attend his Pack's Annual Blue and Gold Banquet. This is the end of year celebration for the Cubs where the Scouts advance to the next level of rank. It's a big deal. Our Pack does it up right with a catered Italian meal and homemade desserts.

On Sunday Helios earned his Bear Rank which he and his Den had been working on all school year. Now they are Webelos and will spend the next two years working toward their Webelos Rank patch and the pinnacle of Cub Scouting, the Arrow of Light.

The presenting of ranks at the banquet is very ceremonial. Each rank has a right of passage that each boy must commit before his new rank can be bestowed upon him. For those earning their Bear patch, they must eat bear meat. The Scouts must ingest the essence of mighty bear's spirit so that they too possess the quiet power of the bear. Each Bear candidate was handed a large hunk of bear meat. By bear meat I actually mean beef jerky. But with all the ceremonial talk of consuming the spirit contained in the bear's sinew and flesh, some of the boys were skeptical whether it was actually bear meat or not. 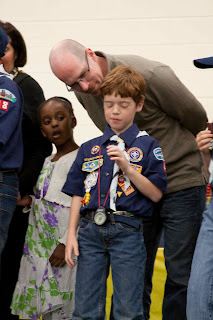 Skeptical or not, all the boys choked down the bear meat like the deserving braves they are. It may have taken the better part of the rest of the ceremony to get all the bear spirit down, but at least none of the bear essence came back up. 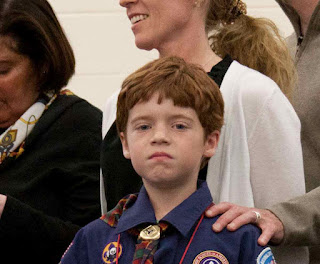 The day was made even more special by the presence of a special guest. The boys' cousin, my niece, Shannon, came for the weekend and banquet. She lives just a short drive away from us now and we love that we get to see her more often. And I love all these dimples and pink cheeks! 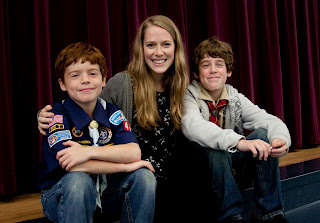 Now, who could resist this Man In Blue? 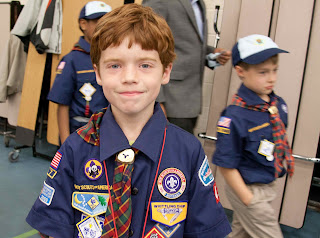