Most people don't like going to the dentist. I however don't mind it and don't have the fears or apprehensions that many people have about dental procedures. I find a visit to the dentist relaxing. Maybe I am chronically tired but I actually fall asleep during certain dental procedures. Cleanings rank with spa visits on the relaxation scale for me. Truly, I was in a meditative state when my braces were installed and removed. I think it all revolves around the comfy reclining chair and finally sitting still for more than a few seconds. The same thing happens to me in movie theatres just after the previews and on our couch after 8pm.

But yesterday, I was on the observation side of a dental procedure, the less relaxing side. My oldest son, Leonardo, had two teeth pulled in preparation for braces. Watching all the poking with needles and tugging with tools that looked better suited for an auto shop than a dental office didn't allow for my usual dental office nap. Plus I had to sit in a hard, straight-backed chair. Who can rest under those conditions?

Leonardo handled the situation like a champ. Of course, who doesn't feel awash with Zen and over confidence under the grasp of nitrous oxide? He was calm throughout, even when they had to give him two extra shots of novocaine. Even when the dentist asked for the forceps by name and out loud instead of in double secret pediatric dental jargon (i.e. Mr. Gentle Tugs), Leonardo kept his cool. I, on the other hand, was on the edge of my hard, straight-backed wooden seat, wishing it were me in the chair instead of my son. At least then I could sleep through it.

The two teeth to be pulled were baby molars and their absence will provide some necessary extra room in his very narrow mouth. While these teeth would have come out in their own time, we, by that I mean the orthodontist, wanted them out on another time schedule. When left to their own devices, the roots of baby teeth generally dissolve inside the gums, the teeth get loose and then come out. Since these teeth were being asked to leave on our time schedule rather than their own, the roots had not fully dissolved. By that I mean, these teeth were securely clamped into Leondardo's gums similar to the way my white-knuckled hands were gripping the edge of my very uncomfortable chair during the extraction, as it is called in the dental world.

A half inch doesn't sound like much, does it? It's not if we're talking hair length or hemlines. But put a half inch in the context of dentristy and it becomes a big amount. This is what Leonardo and his dentist were dealing with yesterday:  a half inch of tooth and root. 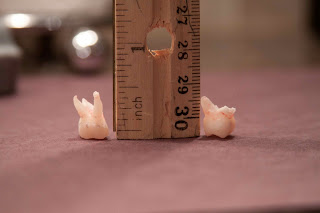 I always wanted my sons' roots to run deep but this isn't what I had in mind. After much work by Mr. Gentle Tugs, out came Mr. Death Grip and his side kick Lil' Stubborn Roots. They were laid to rest in this cute little treasure box. 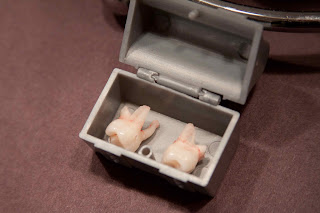 Thankfully, using logic as only watermelon scented Happy Air can provide, Leonardo thinks he actually blew the teeth out himself with his own breath. I will not ask him, but I wonder what he thinks the forceps were for?

And just so you know, in response to an absurd display of extortion, the Tooth Fairy pays five times the regular rate for pulled teeth with roots barbed like fish hooks.