Going to the Dogs

A few weeks ago, we further cemented our status as typical, suburban, middle-class Americans. We already had the two kids, the minivan, PTA memberships, and the fenced backyard in the burbs. So what else did we need to lock in our status? A dog.

We had been cat people up until two weeks ago. Not cat people in the socially awkward, cat-lady sense of the term, but we had only had cats as our pets for all these twenty years together. The boys have had gerbils and fish, but I don't count those as pets. They are more like science experiments. There is a lot of scientific research to be had with these types of "pets".  How long will a fish live under such unclean aquarium conditions? What will a gerbil do if the only attention it receives is during its biweekly bedding change which is done by a disgruntled mother? You don't really want to know the answers to these scientific queries. But just know that these are not real pets.

Cats are pets and they are easy. Cats like to be fed and have their fur stroked upon command. Then they sleep for upwards of 16 hours a day. Our cats have always had dog-like personalities; they like to be around people. They greet you at the door. But then, unlike the dog, they leave you alone when they've had enough of you.

With dog-like cats, why did we get an actual dog? I can blame it on several friends who have gotten dogs within the past year. Jan, Kelly and Becky - you are all on notice as accomplices in this matter. Your dogs have won my children's hearts or at least created their new liking of the idea of a dog. Up until they were around your dogs, my sons only tolerated dogs. Now they like them (some of them anyway).

I can also blame it on Smokey IX, the University of Tennessee mascot. Every time Smokey is shown during the televised football games, I just melt. I love the idea of a blue tick hound like Smokey, one that is clean, well-behaved, fully trained and unfazed by 100,000+ screaming fans. I could own a dog like that.

And then there's the notion that a boy just needs a dog. I think there was an Andy Griffith episode on that theme. Maybe even a Brady Bunch episode too (remember Tiger?) The boy-needs-a-dog idea was planted in my head during my formative years in thirty-minute, sit-com increments. So actually now, my two real life boys need a dog no matter what my logic might say otherwise.

So, we adopted a pound puppy. She's a mix, though of what we're not entirely sure. She's smallish but not so small that she can't be considered a real dog. We believe there is some sort of Corgi in her lineage due to the squat-length legs. We know she has some hound (maybe just a smidge of blue tick way back in there somewhere) in her because she's got a hound face. She came house-broken (yay!) and she only gets up once in the night to be let outside. She's six-months-old and about twenty-five pounds. We love her already. And so does our cat. 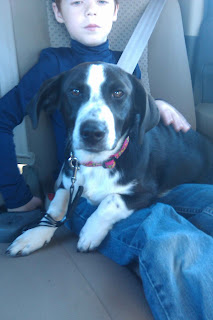 And now both our boys are complete.