I have never been a coupon user. My reasons have been all the common reasons that people don't use them: it takes too much time, the products I use don't offer coupons, it doesn't make that much of a difference, where you save in one place you spend in another, I cut them but forget to bring them to the store and on and on.
But since the beginning of April, I have been conducting an experiment. For the past two months, I have been cutting coupons and using them every time I shop. I wanted to see if I could actually save money on my groceries.
It all started in March when I overheard two ladies discussing their recent saving successes. I have known these women for several years but didn't know they were into the world of deep discounts. I listened discreetly for a few minutes but once they started throwing around savings amounts and deals like I had never heard before, my discretion was gone. I interrupted their conversation and asked how they saved 50% on groceries each week. I asked how they spent less than $100/week to feed their families of 3-5.
It turns out that one of these ladies is a savings genius like the kind you see on the new couponers reality shows. She, The Savings Sensei, has been coupon saving for years, maybe even decades. The Savings Sensei was more than happy to share Her knowledge. In fact, Sensei was grooming the other lady and helping her organize her savings life. And She took me under Her wing too. I had stumble upon a mentor.
Sensei's initial instruction was a bit like Mr. Miyagi's advice, seemingly unrelated to the topic at hand. She told me the first thing to do was to get a lunch box. Huh? Is there a hidden meaning here? Is lunch box couponers' speak? No, She really meant a lunch box. That is what Sensei carries her coupons around in, organized and categorized by labeled tabs, with a latch so the coupons are tucked in safe from drops and spills. Her next advice was to "just start cutting," Grasshopper.
My grocery bill has always been significantly more than $100/week. Each week, I would make a menu plan, buy the items I needed for the menu, usually all at the same store.  My goal was to do all my grocery shopping in under an hour. In and out, no matter the cost. I would have to change that approach if I were to really make a go at this savings thing. Sensei told me which stores had the best deals on certain items, what stores had special double coupon days, even where to buy the newspaper at the lowest price so that even my coupons were discounted. Being that I don't bring in any money into our household, I felt it was my duty now that I had a mentor to be a good student and attempt to save. I'm not one to follow directions to the letter so I didn't a get a lunch box but I got this 10" x 5" accordion file. It fits in my purse so I can keep it with me at all times. I didn't think I would carry a lunch box that reliably. (Sorry Sensei). 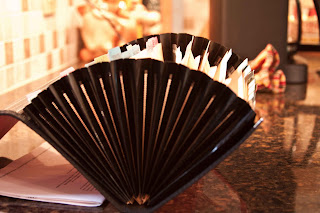 And I organized it by category. 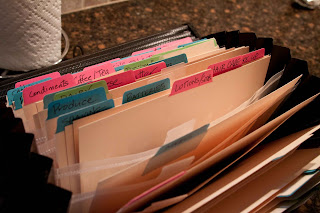 And then I started cutting. 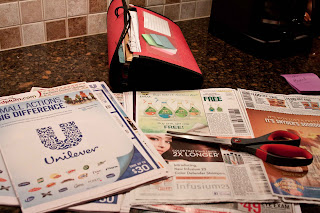 ﻿
The first day of April I set out to my local Bloom store with my coupon wallet organized and stuffed. Bloom graciously hosts a Super-Double Coupon day on the first day of the month where they double all coupons up to $1.99. Many stores double coupons but not over $1.00. So this Double Day is a sweet deal. For example, we use Rice Dream

which costs around $2.69. On Super Double Day, I used my $1.00 off coupon (which was doubled to $2.00) and I got Rice Dream for $.69!  So I bought as many as I had coupons which, thanks to my new-non-Rice-Dream-using-coupon-cutting-friends, was 8 (for about the price of 2 at regular cost).
Bloom also has great BOGO offers on that day too. Sensei told me to pair my $1.00+ coupons with the BOGO offers and things can come out nearly free or just really super inexpensive. Sensei also recommends buying in quantity on sale, with a coupon not just al a Big Box Store. This is something I never did before. I would always buy as I needed rather than stocking up. Sensei told me to take advantage of deals when they are available.
Most of this stuff may seem obvious and you might be asking why one wouldn't be shopping in this manner anyway. It would be irresponsible to shop any other way, right? I refer you to the first paragraph of this post for the list of reasons. Plainly stated, it's easier, and yes irresponsible maybe, to just go buy things without working the math and the logistics of getting a discount. Ignorance is bliss and usually costs a bit more.
But at the end of my first Super Double Day, I was thrilled to see my savings of 57% off of full retail price. Oh Yeah! And I was hooked. Maybe Sensei can, but I can't save like that every time I shop (only on Super Double Days). But my total April grocery bill was 35% less than the average monthly amount for the past several months. My May bill was also down 30% from prior average. The point is I am spending less.
We have eaten just as well as we did previously. I have continued to buy the brands my family likes. I buy organic. I now have a back stock of certain items. I still make a weekly menu but I try to use what I have on hand and supplement with items that I can either get on sale or with a coupon. I print coupons off the web. I buy two Sunday papers (at a discount) and get two of each coupon so I can stock up. I routinely shop at more than one store now.
All of this change is paying off. And to prove it, here is my last grocery receipt. 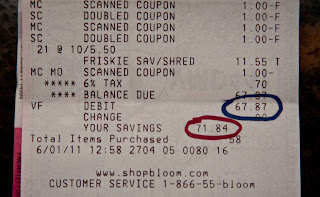