And The Award Goes To...

Not the Grammys. I'm talking about The Pinewood Derby. The race has come and gone and like most things in life, it didn't turn out exactly like we planned. It turned out well for the most part but the specifics were just a bit different than we had expected.

Awards were won, but not the ones the boys predicted. We predicted the "Shag Mobile" (as in carpet, not Austin Powers) would receive the award for Most Creative Use of Materials, given that it is most likely the only Pinewood Derby car in the entire Cub Scout history to be completely encrusted in pipe cleaners. But interestingly, it was awarded the Most Colorful honor. And in direct opposition to the performance of its predecessors, it actually had some speed and won 2nd place overall in the heats for Leonardo's Den. 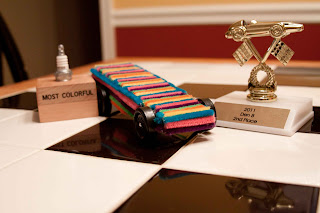 The other surprise was Helios' car/skateboard. It was awarded Most Creative Use of Materials rather than Best Vehicle That Is Not a Car as predicted. 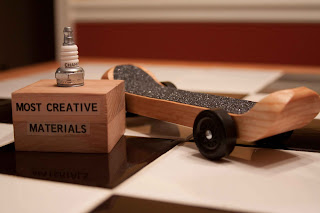 Awards for the boys' cars were not guaranteed. The competition was stiff. Just look at the field of competitors. 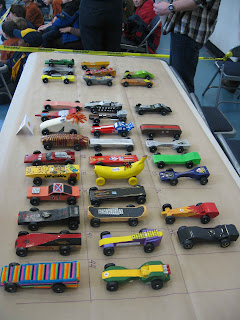 On the downside, another unexpected event was that Helios needed a proxy to represent his car. You can't participate in the Derby like this. 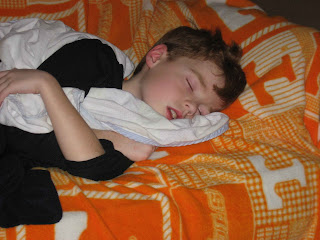 Yes, the stomach bug has come back to our house. But so far has taken only one direct victim. There were collateral damages in that we had to cancel dinner guests to our house Saturday night a mere 20 minutes before their planned arrival. I hope they enjoyed the pizza they most likely had to order. Hubby, Leonardo and I had to eat more appetizers, spicy salmon and red velvet cake than we would have normally eaten had our dinner gone on as planned. Okay, maybe we ate the same absurd amount. But we felt we had to keep eating. Thankfully, we didn't get sick with that menu.
Anyway, Leonardo was well and happy to play proxy on Sunday. 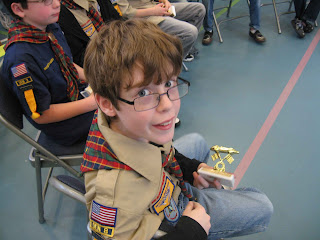 I was sad to miss his very last Pinewood Derby ever. He's a Webelos, on his way out of Cubs and on to Boy Scouts. To console myself about these facts, I had to eat an extra piece of Valentine cake on Sunday while I sat at home tending to the sick during the Derby.

While we still have a few pieces of cake left, I really should put some in the freezer for when Helios is feeling better. But not all of it. I might need a piece to console myself about something else today, like the fact that my still new washing machine is leaking and I have all that extra stomach virus laundry to tend to. Or I might choose to look at the positive side and need to celebrate something like the nice weather. Either way I'll keep one piece out for me just in case while I wait for plumber to arrive.