Happy New Year! We rang in the New Year with a few of our closest friends in our own home. It was a fun night for all. The adults lasted as late as the kids did. All of us made it to midnight although I am not sure all of the adults were fully awake. There were lots of yawns, stifled and not so much.

We watched/talked over Dick Clark's Rockin' Eve. I'm not going to comment about the reunion of the Backstreet Boys and NKOTB. Okay, I am going to comment but just to say that I like my boy bands staffed by actual boys. These guys are 30+  years old, right? I don't think a boy band should come back as a boy band when the members have fathered boys that are almost the same age as the original boys were when the band started. Maybe they would have been better off to not revisit their old songs (and dance moves...eeeww) but try to reinvent themselves with new music. New names might be more appropriate too. Like The Cul de Sac Boys because I bet they all live in nice suburban neighborhoods now. And now that the members of NKOTB are older, they might be better named NSNKOTB (Not So New Kids on the Block). And if they try this reunion thing again in say 30+ years, they could go with OMOTW (Old Men on the Ward).  I know I am reaching here, but I think they were too.

Aside from the laughs provided by the icons of pop culture, we had a great time with great friends. It was a perfect way to welcome 2011.

In keeping with New Year's Day tradition, we ate black-eyed peas today. My husband loves beans of any kind and claims to have eaten more beans than any human alive. We have not had this documented but may be making a call to the Guinness people to see what his competition might be. New Year's Day fare is right up his alley. He would like to eat this way everyday. I try to meet his needs. But I am not so much the legume girl and you can imagine that the two boys in the house aren't begging for beans at every meal. He does get plenty of beans however so please do not feel sorry for him. 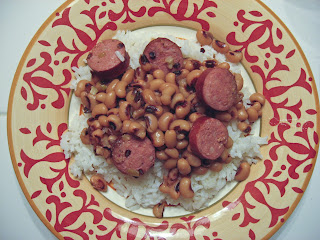 It was delicious. Even the 10 year-old ate it, but mainly the sausage. The 7 year-old ate the rice. As predicted.

Ever wonder why we eat black-eyed peas on New Year's Day? Of course we all know it is for prosperity in the coming year. But who started it? I asked Wiki and found out that the origins go back to the Jewish Talmud and the custom was adopted by non-Jewish folks in the U.S. some time around the American Civil War.

Based on the amount of black-eyed peas that we each consumed today, our outlook for 2011 is pretty good. Hubbie, the bean eater and future world record holder, obviously ate the most and that's good since he's the only one with a job and a paycheck. We need his prosperity odds to be high.

I came in second, eating approximately 75% as many peas as my husband. So my prosperity odds are only 3/4 of his, but that's in line with the women's to men's earnings ratio of 77% as reported by the Institute for Women's Policy Research. I wonder if the Institute considered the effect of the New Year's Day fare in their study.

As far as the boys go, their consumption was scant. The oldest ate probably fewer than 10 peas and the younger ate none. Apparently, the black-eyed pea to prosperity rule does not apply until you reach adulthood. If my kids are any example, they are prosperous all year long without relying on peas passing by their palate. I think maybe their dad's consumption must help us all. I didn't see anything in Wiki about the rule applying to households rather than individuals but that must be the case since we are prosperous in so many ways: family, friends and all the comforts we need. I hope you, or someone in your household, ate lots of black-eyed peas today. Happy 2011!