I Take a Little Colonial In My 21st Century

My parents are the sole heirs of their family fortunes. They are both only children and thus always knew they were to inherit everything. Their families were not monetarily rich so "everything" came in the form of things rather than financial accounts. They have kept much of the stuff from both their families and they know what belonged to whom and other historical tidbits about the items.

They have always told us kids the history of the pieces. We'd sit down to a holiday meal and be reminded on which ancestor's china our dinner was being served. For much of my younger life I wasn't that interested in this type of history. But now I find myself asking my parents to tell me again who those silver candlesticks belonged to.

I recently have begun calling my dad "The Curator." My recent questions have proven that he knows precisely the who, what, why, where and how of everything they have. He has all this information cataloged in his brain assisted by sundry scrap notes strategically placed throughout their apartment. And he has the help of his docent, I mean, Mom. I envision burgundy velvet ropes at the entrance to my parents' home, Dad as museum curator and Mom as the friendly, knowledgable docent.

Mom and Dad have given my brothers and me several family pieces for our own homes. I try to remember the history of these pieces, but I'm not really good at keeping up with the details. So I thought I would do a few posts on some of these items, telling their history, in hopes that I can preserve some of my parent's knowledge for my boys' benefit. Although the boys may not care now, I think they will one day.

Back in the 70s, Dad was heavy into woodworking. He bought a router and routed everything he thought could benefit from a good routing. We had lots of cutting boards and one particular kitschy sign hanging over the kitchen sink that he fashioned to read "Sally's Ye Ole Kitcher".  His routed "n" didn't quite come out clear.

Back then, Dad eagerly read each month's issue of Early American Life. The December 1975 issue in particular held a fascination for him with an advertisement for reproductions of wooden "Liberty Bell Lanterns" that originally hung in Independence Hall. Dad read the ad and decided to make a few lanterns. He drew a pattern based on the dimensions described in the article. As Curator, he still has the original magazine issue and his hand drawn patterns. I had the Docent scan the Curator's original documents, complete with his handtyped and signed commentary on the excessive asking price for the magazine's reproductions and Polaroid shots of his own reproductions. 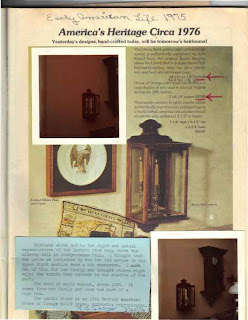 One of the things Dad received from his father was lots of old wood, some of which had been a primitive late 1800s walnut rope bed that in 1975 was already approaching 100 years old. As I said, it was old wood. I think Dad may still have some scraps of it left. I won't be surprised if one of my brothers ends up with what remains of this old wood one day. Dad cut and routed the walnut and over the next few months made several lanterns.


I have two of the lanterns hanging in my dining room flanking a large cabinet. 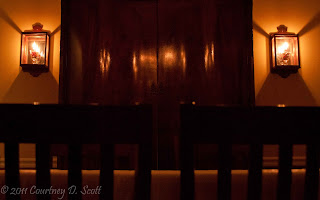 They create dramatic light and shadows. 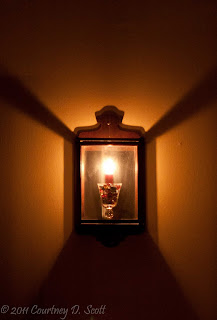 The back is mirrored, the sides are glass and the top is open. 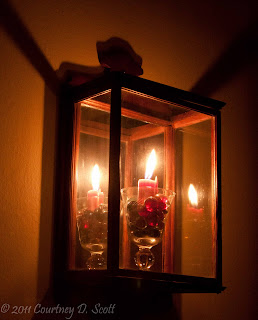 The mirror and glass combination create a bounce effect that generates multiple reflections of the flame. 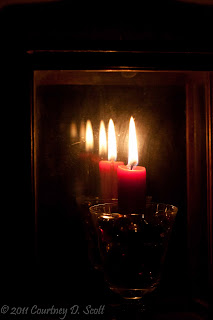 To the Curator's chagrin, I do not keep my lanterns dressed with period authentic candlesticks. I guess Pottery Barn has too much influence in my house for me to maintain an 18th century decor. I like a little colonial mixed with my 21st century. But Dad thinks we should all be living like we're on an episode of Frontier House or at the very latest 1900 House. The Docent helps keep him somewhat current.
My boys beg to light the lanterns at dinner time and they like to count the number of flame reflections they see. Just like my brothers and I did when we were little. And one day my boys will each have a 45 plus year old 18th century lantern reproduction made by their grandfather from 140 plus year old walnut from a 19th century bed that was stored in their great-grandfather's cellar in Belleville, Illinois. And their kids will count all the reflections they see.