For years now, my exercise of choice has been running. My husband choice is road biking. He rides faster than I run so exercising is not something we can do together...until now! We are joining forces and will be participating, dare I say competing, in our very first duathlon. We have signed up for a little race in March along with another husband and wife team, friends P & K (you guys have signed up, right??).

I say it's a little race because the distances are minimal and it would be easy for all of us to go outside and do it right now. No training required. But it will be cold. March is a bit too early for real Spring weather to make an appearance here in Maryland. Aside from the expected low temps, we are all (the four of us, right?) excited about the race. It will be fun. And we have our sights set on a few longer races later in the year.

Hubby and I haven't had a shared fitness goal or interest in many years. We've both stayed very active but he's done his thing (refuse to run) and I've done mine (refuse to bike). But way back when we were young and in love (as opposed to not so young now and in love), we did share a common fitness activity. Here's a hint: 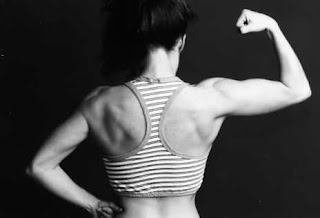 That's my back and sundry rippling muscles, not his.
Here are his. 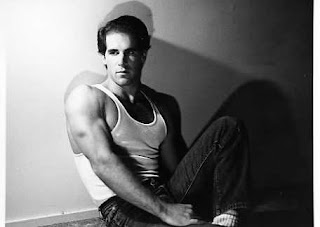 We bodybuilders were nothing if not vain.
This was in the 80s and lots of things (read body shapes) have changed. But one thing that hasn't change is the motivation of a competition, a new distance or pace goal, an new ﻿max weight lifted or a new PR. It's been too long for me since I've had a specific goal in mind and signing up for this little race is just what I needed to get 2011 and my exercise regime off to a good start.
Go Team Scott!