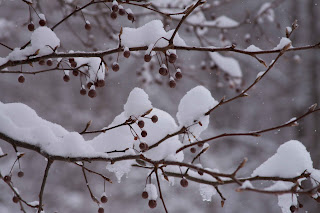 The kids were sick for the first two days of the week. And just as the stomach bug was leaving our house, its distant cousin, the wet productive cough showed up. Tuesday night, my elder son lauched into a coughing episode that wouldn't quit. We gave him cough medicine to the extent possible, but the child could not stop coughing long enough to sleep. Then I remember something I had heard years ago when the boys were babies: slathering Vick's Vaporub on the bottoms of the feet and covering with socks will stop coughing and allow the person to sleep...for hours. I had never tried this and thought it sounded like bunk. But we were desperate. I checked snopes and found there was no harm to trying. So I slathered my son's feet and socked them. No lie....in 5 minutes his previously constant, body-racking cough stopped and within 15 minutes he was sleeping peacefully. And he stayed asleep all night with no coughing. I can't explain it but it worked. And I am now one of those people who can provide anecdotal evidence for the use of Vick's in an unprescribed way.

And speaking of explaining things, I spent a few hours yesterday reviewing the Family Life Unit materials that my son's 5th grade class will cover next week. This is the first real intro to reproduction for them at school. We've already covered much of this with our son at home. I didn't find anything too objectionable in the materials other than the general fact that these kids are 10 and 11 years old and I like to think that those ages are too young to know all this stuff but I realize that it's not really too young in today's world. When I look at these kids many of them definitely look older than I remember my own 10 year-old peers back in my day. The generations are aging quicker. If this "aging of the generations" keeps up, will we be covering reproduction in Pre-K one day? Yikes!

And speaking of generations, we got my parents set up on a new computer this Christmas. They have had one for several years, using it mainly for email and a bit of geneaology. They upgraded to a new, fast model with a webcam and all sorts of extras. Then we got them using Skype. They think it is nothing short of magic that they can see and talk to their grandchildren, live and in real time, right over their computer screen. How do they do that? they ask. We don't try to explain how it's done, it just is.

And in keeping with the week's theme of not much that was meant to be has come to be, there is a two-hour delay of school opening this morning due to the dusty of snow we received last night. So my much desired trip to the gym this morning will not be. And as for the healthy meal planning and execution, that hasn't happened this week either. But really, you have to ease into these types of drastic changes. I wouldn't want to rush into anything.

This post is linked up with Mrs. 4444's Friday Fragments.

Email ThisBlogThis!Share to TwitterShare to FacebookShare to Pinterest
Labels: Too Funny Friday