We had our annual audience with the BMIR Friday night. I didn't think it was going to happen this year. Just over a week ago, both boys came to me and said, "We don't want to go see Santa this year." They looked at each other and nodded after saying those words, like they had rehearsed this. I hid my shock and slight worry and asked why. The older one said he "was too old" for it and the younger one said he "didn't feel like it" this year. So as to not fall into whatever game they seemed to be playing with me, I just said "Okay, if that's what you want."

I knew the day would come when they would no longer want to go see Santa. But I'm not ready. I like seeing Santa them see Santa. I like wondering if Santa can really come through on Christmas morning with their requests.

But I knew they were playing a game with me. I'm older so I can play their game...only better. A few days after they started this, I asked them innocently, "So if you don't go see Santa, how are you going to tell him what you want for Christmas? You do still want some gifts from him, right?" ...Crickets.....

Then the younger one said, "You can tell him for us." Clearly, he still doesn't know how all of this works.

So I reply, "I could. But Santa probably puts those types of requests on a lower priority list than direct requests from kids."

To which I clarify, "Santa may not think you really are that interested in his gifts if you can't take the time to tell him yourself. Maybe you could write a letter at least and increase your odds." (My boys would rather do almost anything other than write so I knew they would not bite at this.)

In response, there was just a load of unintelligible grumbling coming from the boys and the conversation died.

For the next few hours, the boys spent a lot of time whispering to each other and avoiding me. They acted like a flimsy Survivor alliance on the afternoon before Tribal Council, conspiring but trying to act normal. Later, they came to me as a united force saying, "We think we will go see Santa after all." Match point: Mom.

So our Christmas tradition was preserved for another year. My younger one has always been suspicious of Santa and he continued his part of the tradition Friday night. He can't hide his true feelings. 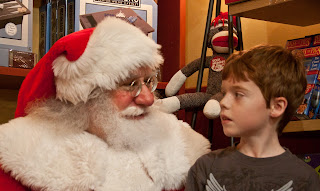 But once Santa started listening to his very specific requests and actually knew what Beyblades are, my son started to ease up a bit. 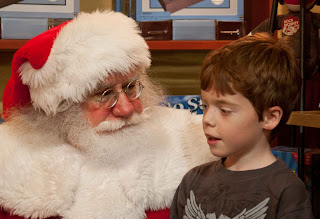 ﻿By the end of it, he had lowered his suspicion to a manageable level but the true test will be whether Beyblades are under the tree on Christmas morning or not. 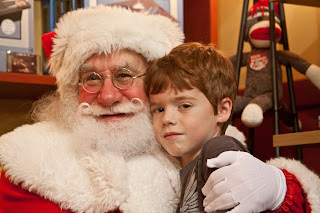 My older son had conceded to seeing Santa this year only in solidarity with my younger son. But he showed up with enthusiasm. 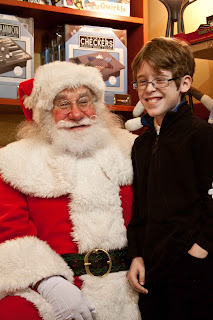 Until Santa asked my younger son if the elder one was a good big brother. His enthusiasm was briefly placed on hold while we all waited for the response. 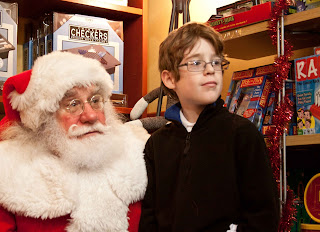 Luckily, little brother had big brother's best interest in mind and gave Santa the proper answer. Although I am not sure Santa bought it completely. 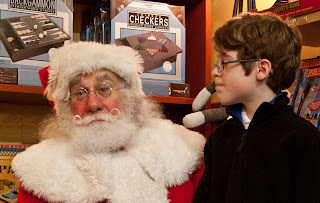 ﻿
That's okay. I'm not sure my boys completely bought into Santa after all this year. There was one awkward moment where Santa made reference to his own twin sons as teenagers...crickets again...
We don't recall that part of the holiday story. When the boys ask questions about that, which I am sure they will, I don't know how I will handle it. Thanks Santa.