And When You Smile for the Camera, I Know They're Gonna Love It

Well, if you must know...my interview was postponed. Apparently, the NBC crew assigned to my story was reassigned at the last minute to some more pressing, breaking news story. I can't imagine what that might have been. I watched the news last night and saw the same old stuff. But anyway, my story has been put on hold.

I was called, however, on Friday for a pre-interview phone interview with the producer. She was very nice and asked me all the questions that the reporter was going to ask me during the real interview on Monday. Apparently, they like to know basically what you are going to say before the camera is rolling so you don't throw the reporter a curve. And they also like to groom your answers a bit. The producer paraphrased a few things I said and suggested that if I was comfortable doing so, I could use her words. She was a bit more concise than I tend to be.

But I didn't get to use my words or hers yet since the interview was postponed. I should have known that the interview might be bungled when I received the follow-up email from the producer and it said, "Hi Stephanie..."  That's not my name.  But it was an innocent oversight, a simple cutting-and-pasting faux pas. She's knows my name. We got that straightened out.

Now I know you're dying to know what this interview was supposed to be about. My photography? My blog? My volunteer efforts? My oh my...you're way off base.

The answer:  My teeth!
Huh? Yes, I had braces not too long ago and my orthodontist used a new cutting edge technology in orthodontia, SureSmile, on me. Dr. Moles was being highlighted by NBC for his use of SureSmile and the interview was prompted by The American Association of Orthodontists annual conference which is to be held in DC next week.
I am the After Person. After treatment, that is. Which is fine with me. I would not want to be the Before Person or even the During Person. Here's a picture of me as the During Person. 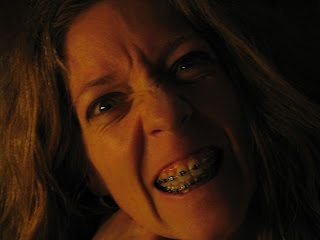 No one wanted to interview me then.

Oh I am so happy to be the After Person, not just for this (possible) interview but in general. I am so glad to be done with braces.


Braces are uncomfortable. Braces take away your enjoyment of eating. Braces make your lips puff out. I looked like Angelina Jolie for a whole year, only without the smokin' body, cascading hair, doe eyes and passel of children. Braces make oral hygiene difficult. Braces make kissing a challenge. Which I guess is why we like to have our adolescents (or pre-adolescents) in braces right about the time they discover that pastime. But as an adult, it really puts a damper on that activity.
By the way, these are not the things that the producer was paraphrasing. We didn't even get into eating, Angelina or kissing in my pre-interview interview. We stayed on the topic of SureSmile.
Anyway, now that I have experienced braces I will have more sympathy for my sons if and when they have these devices implanted in their mouths. I know how it feels. My memories are recent. But I will request SureSmile for them if that time comes as it reduced my time in braces by 6 months as compared to traditional orthodontic measures (face camera and give a big smile here.)