I am posting this on behalf of Sticky Chicken today. He wanted to write his own post. So here he is...


Guess where I've been! Here's a little hint. Does that hand look familiar? 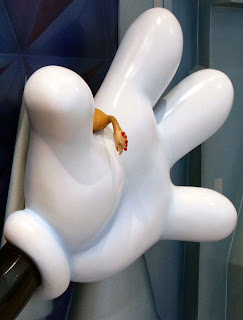 Let's step back a bit and see if you know now... 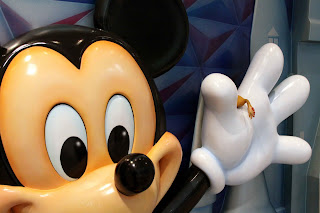 Oh yeah...I hooked up with my home boy Mickey M down in FLA! 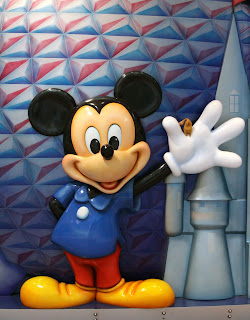 He was right there, standing just like that, waving those four big white fingers at me when I came out of the terminal at Orlando International Airport. It was great! Out of all of the passengers arriving that day, I was the only one he picked up and gave a photo op right from his glove. Everybody else had to stand on their own feet around him to get their pictures taken. I felt really special, grade A.

One thing I did notice about Mickey this time was that he was doing the Michael Jackson one glove thing. It's hard to tell in the picture, but his other hand was not gloved. It was a nice tribute to Michael.

I asked Mickey to join us for dinner but he said he had to stay there at the airport. Something about being a statue and inanimate. I don't know. Anyway, we left and I was glad because flying is hard on chickens and all I wanted to do was... 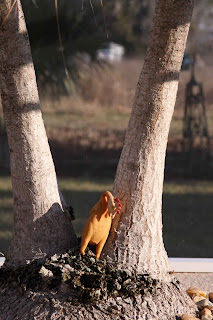 ...work on my vitamin D stores. 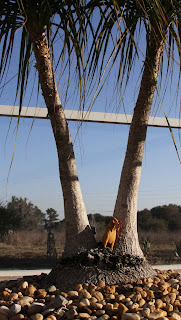 And after all that cluckin' snow shoveling last month, I just needed to sit, relax in the sunshine and work on my tan! 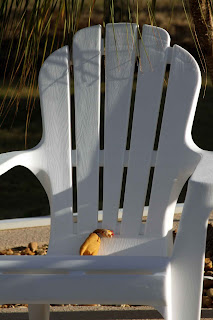 I was sure to use a 50 SPF (sun poultry factor) 'cause I didn't want to end up on the KFC menu, if you know what I mean.

Anyway, after sitting around the pool for a few days, I wanted to see some of the sights of Florida so off to Kennedy Space Center we went. My favorite part was lying on the pavement right under a Space Shuttle. Those things are huge! And the pavement was really warm and toasty! Like the warming lights back at Tyson but I didn't feel all caged in. 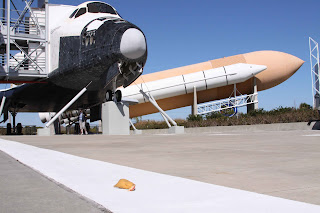 And then the last part of our visit, I met an astronaut! How cool is that? We talked about space and orbits and how an egg sort of looks like the early space capsules. Really awesome stuff! I don't think there's ever been a chicken in space. I know dogs and monkeys have gone, but no poultry. I was just about to ask my new astronaut friend what I would need to do to become the FFIS (First Fowl in Space) when he grabbed my neck! What the cluck! 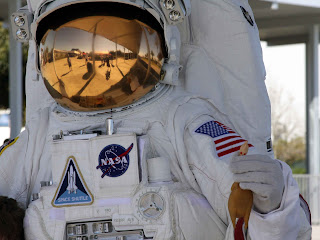 Thank goodness, my new adoptive mom grabbed me before he started swinging me around. Who knows what would have happened! There was a bit of confusion and he said something about not realizing where his fingers were in those big space gloves of his. Right! I think he was threatened by my ambition for the space program. They are going to have to make HUGE job cuts once the Shuttle program ends. Anyway, we left shortly after that. Later that night, I heard my adoptive parents talking about my close call at Kennedy. It was scary and but it did NOT make me rethink my goal of becoming the FFIS.

All in all, in was a great spring break! I'm thinking Cabo next year!