Training the Spirit as Well as the Body

Tang Soo Do is a Korean martial art form. It is the type of karate that my sons practice. TSD focuses on what you typically picture when karate pops into mind: punching, kicking, and sparring. Before our exposure to TSD, I generally had a negative idea of karate for kids...courtesy of the evil dojo (a martial arts training school) led by the unethcial sensei (Japanese teacher) from The Karate Kid. But our experience has revealed that TSD also includes dimensions of self-awareness, self-control, humility and respect, good stuff to know at any age. And the boys' sensei and dojo hold no resemblance to the ones that Daniel LaRusso was up against.

However, the boys' experience is like Daniel's in some respects. They have their own Mr. Miyagi, you know, the "wax on, wax off" guy. Their real life Mr. Miyagi is Mr. B.  Mr. Miyagi had Daniel washing and waxing his classical cars under the pretense of teaching him karate.  My boys aren't waxing Mr. B's car or painting his fences but they are doing Mr. B's bidding in class...repeating kick after kick, form after form.

Just like Daniel, I thought all that "wax on" stuff was just movie metaphors and a means to getting Mr. Miyagi's paint to gleam.  I mean, how can you learn karate, or anything for that matter, without actually doing the thing you are trying to learn?  How can you master say, horseback riding, when all you practice is riding a bicycle?

Well, there is some truth to the sensei's madness.  My oldest son recently tested for his TSD green belt.  As part of the test, he was required to break two one-inch thick wooden boards with specific kicks.  Just so you know, this boy is barely 60 lbs and they don't practice breaking in class...EVER. They don't really talk much about breaking boards, as far as I know.  I was nervous for him.  How was he going to break these boards?  When the breaking part of the test came, he positioned himself, focused his mind and ...THWACK...split the board right down the middle!  And then he did it again with a second kick!

All of our faces, my husband's, my son's and mine, held surprise after the boards split.  Only Mr. B's face remained unfazed.  How did this happen without actually practicing with boards?  All of the air kicks and phantom opponents he has kicked over the past several months had primed him for the boards.  It's all about positioning, muscle memory,  and the ability to visualize an end result.  And belief. Training the spirit as well as the body. Wax on, wax off.  Mr Miyagi  and Mr. B knew. 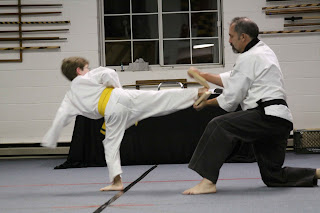