If you were a teen in the 80s, you know what I mean when I say, "Word up!" or at least you know from where that phrase came. As grammatically incorrect as it is, Word Up is embedded in my mind forever. Thank you Cameo. It's the 80s version of today's ubiquitous "I know, right?" with the lilting inflection that every tweenager and beyond seems to have perfected. Can anyone tell me where that came from? Not from Cameo. Either way, I think they both are meant to show approval or comprehension. Word up? I know, right?

None of this has anything to do with the Grammy Awards other than that was a catchy title to get you reading on Grammy Sunday. I don't think Cameo evey won a Grammy. Or did they?

Back in the 80s, I never envisioned that thirty years later my Word Up would be in the form of kitchen decor. I had a blank bulkhead in the kitchen that needed something. 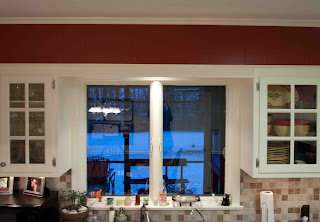 That red area above the sink looked naked. 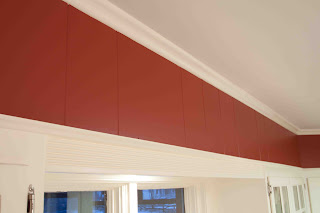 We decided to paint a catchy phrase on the bulkhead. La Cucina had already been done. Instead we opted for something that meant something to us and settled on our phrase (I can't tell you what it is yet.)
But then we remembered that painting letters would require some skills that we do not possess.
So we got a problem. Yeah, who'll solve it? Not Vanilla Ice, silly. The answer is always online.
We found wordsanywhere.com and our bulkhead will never be the same.Wordsanywhere allows you to order custom lettering in font, color and size of your choice in easy to apply (and later remove if you so choose) vinyl that looks like the painted work of an artiste or at least someone really good with graphics. 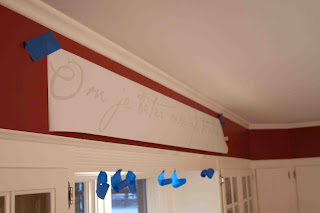 Your custom phrase comes sandwiched between two sheets of wax-like, grid paper with simple directions for application﻿. You position your phrase and peel off the backing. Then, with a credit card style applicator, gently rub the letters on to the wall and off the front sheet of paper. 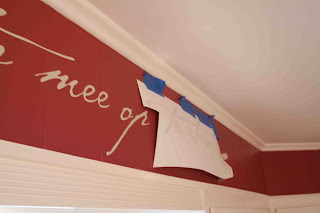 Easy and quick to apply! Inexpensive too.
And doesn't our bulkhead look happy? 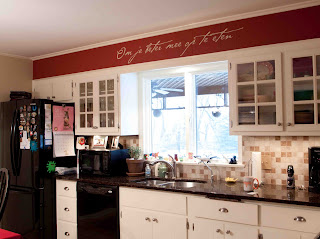 Now, about the mysterious phrase. It's not in English and I'm not going to tell you what it says. Does that make you mad? I had you wait all this time, missing part of the Grammy Awards and I just leave with unanswered questions. But I know someone out there can figure it out. If you can, post a comment with the translation, the language and for bonus points, the source (think 90s). For those of you who have been to my house recently (or if you are my mom), please don't answer and spoil everyone else's fun. That wouldn't be fair. I know, right?