...There must a house concert inside! Our house was rockin' Saturday night when we finally hosted our very own house concert. I talked about house concerts a looong time ago after we attended one for the first time. Since that time we have had hosting one on our To Do List. A year and half later, we can mark that off the list. But that doesn't mean we are done with house concerts.

So what is a house concert? A house concert is a small, intimate live music performance in the comfort of a private home. House concerts are usually by invitation only so as to keep them intimate. Food and beverages are served and may even be potluck. A cover charge may be collected to pay the musicians and cover other costs. The performers are hired to perform a few sets and in between sets they mingle with the guests and enjoy the party themselves. 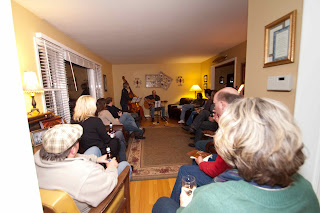 Being that we knew the musicians, we kept it free. Bo Weevil played song selections from his newest CD, Make It Right and was accompanied by jazz multi-instrumentalist, Anita Thomas who also played on the album. 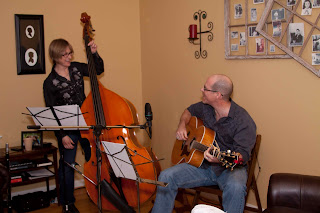 I guess to say the house was rockin' is a bit of a misnomer given that Bo and Anita were playing Americana, country blues and rag time influenced music. Rockin' might also be a strong word when you consider that the guests were mostly 40-somethings, drinking various ultralight beers and eating cake balls. Maybe I could just say the house was groovin' instead? Either rockin' or groovin', the music and the food were superb. Thanks friends for all the yummy food you brought to share too!

A house concert is a bit like theater-in-the-round such that it brings the musicians and the audience into one space and creates an atmosphere for dialogue between the musicians and the audience. There was much bantering back and forth on Saturday night between the Entertainment and the Entertained.  This adds to the comfortable, personal nature of a house concert. It's a very participatory experience. At house concert, you also get the opportunity to hear the musicians talk about the songs they are performing and gain a little insight into the writing of their songs.

In the end, musicians and guests alike had a great time. The night was so successful, we can't wait to do it again. Next time, we hope it will be bigger and maybe even an outdoor event...a lawn concert perhaps?