Even though it's December and I should have already done this, I have to post about our Thanksgiving. When I am done with this, I might actually start getting ready for Christmas. Really, this is the only thing that is keeping me from jumping right in to my holiday to-do list.

We spent Thanksgiving in Tennessee, God's country as I have said before. In case you forgot what God's country looks like, here it is. This would have been our view if we had looked up and past the mountains of food on our Thanksgiving plates. 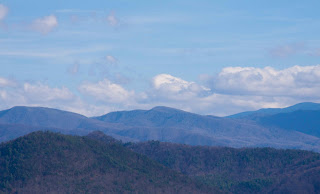 The food mountains were nearly as beautiful as these. We shared a fabulous meal with several members of my husband's family and my parents. The food was plentiful and delicious. The turkey was moist. In fact, all the food was moist. One of the family members, who happens to be Scottish and therefore hasn't celebrated many Thanksgivings, was coached to use "moist" when complimenting the Thanksgiving feast. You can't go wrong if you say it's "moist", he was told. We laughed frequently as everyone noted how moist every dish was. Say moist enough and it loses all of its intended meaning and becomes something else not so appetizing or complimentary.

As surely was the post-meal activity at the first Thanksgiving, my kids got the older "kids" involved in a heated session of MindFlex. The older kids had only heard about MindFlex but had never seen it in action so they were very excited to test their cerebral skills. And my kids wanted to see what the big kids were made of. MindFlex reads your brainwave activity via a wireless headset and uses your brain activity level to manuever a ball around an obstacle course. Think it. Move it. Believe it. Says so right on the box. It was funny to see who actually had brain activity after Thanksgiving dinner and who did not.


Some thought the best approach was to stare fixedly at the ball to increase your concentration. 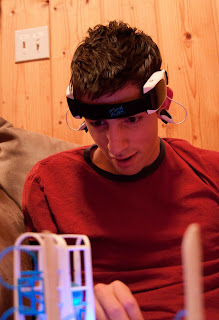 Some thought that the closer you put your face to the ball and obstacle course, the more effective your efforts would be. 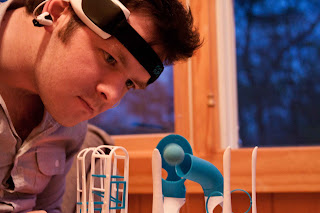 Others thought that you could somehow use hand gestures to effect the ball's movement. 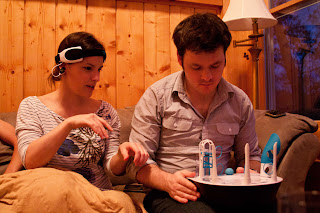 Not surprisingly, there was some brain activity detected in all subjects who tried MindFlex. These are really smart young adults we're looking at here. But I do think the testing was unfair since their systems were riddled with L-tryptophan and maybe a wee bit of wine. How else do you think my boys could have convinced them to wear that silly headset and take MindFlex so seriously?