While I'm on the subject of music, let me tell you about one of my absolute favorites...Shawn Mullins. I mentioned him yesterday and feel I need to clarify what I said. I labeled him as "the guy who did Lullaby." I did that not because that's how I think of him but because that may be how most people think of him. Lullaby was Shawn's 1998 break out hit. That's the year most people were introduced to Shawn and probably the same year many forgot about him. But my history with Shawn started long before 1998 and I have never forgotten him.

I first found Shawn playing solo acoustic guitar, unplugged, in the upstairs coffee room at Oxford Books in Buckhead in Atlanta. I think the year was 1991. Shawn was scraggily looking and his performance was similar. He played a song called Shimmer which stuck with me.

As I made my rounds listening to local music, I saw Shawn again and again around Atlanta and each time his songs stuck with me. After a while, I stopped seeing Shawn around so much. And then one 1998 day, like the rest of you, I heard Shawn and Lullaby on the radio. With that, Shawn rocketed out of his small Atlanta fame into national Adult Top 40 chart notoriety for a few weeks in the summer of 1998.

For years, I would take Shawn with me Everywhere I Go, and listen to his music over and again. I had clients all over the state of Georgia and Shawn would accompany me on all those long intrastate drives. Or rather I would accompany him.

More years go by and I'm grocery shopping here in Maryland. I hear from the grocery store Musak Shawn's voice and I think it's All in My Head because after Lullaby, I thought everybody else forgot about Shawn and he was probably hiding out near The Gulf of Mexico or even Catoosa County. But there he was again.

Now that we were reunited, I made a point of seeing him live at Rams Head in Annapolis when he was passing through. You would have to be dead for Shawn's music to not Light You Up.  Listening to Shawn's music is like Leaving All Your Troubles Behind and it gives you Something to Believe In.

Shawn will likely end up one day on a One Hit Wonders show. That's unfortunately what the masses will remember of him. But he is so much more than that one song from the late '90's. He is a phenomenal songwriter and performer. In songwriting circles, he is highly regarded and has worked with many big name songwriters, most of which the masses don't know either.

But you can break out of the herd. If you don't know Shawn like I know Shawn, do yourself a favor and follow all those links and listen. Then go directly to iTunes or Rhapsody or where ever you get your music and buy some Shawn. And listen again and again. 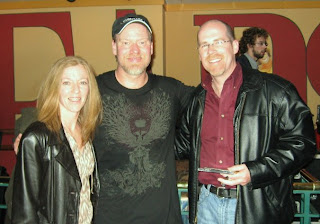