The Importance of Timely Local News

I don't read my local paper. Frankly, there usually isn't much in our local paper that I won't hear about from friends and neighbors. This town is so small in the sense of news travelling fast that you can't miss much. Or you can't miss it for long.

Last Friday, August 20th, to mark the end of summer, a friend, K & I took our children to a place we had heard about for some time but had never been. The place was the Rocky Ridge Municipal Slide at Mount Tabor Park. This slide, known as "The Big Wooden Slide" is just that, a 35-foot high, 100-foot long slide made of polished hardwood the sheen of which rivals some lesser bowling alleys. 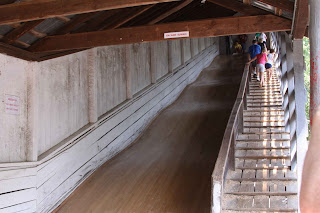 I suspect you probably know of this slide because it was all over the news on August 18th. And not just our local news. But I seemed to miss this news item, otherwise I would not have been there with my young children and their soft underbellies on the 20th.
News story aside, this slide is an awesome example of Americana fun. Built in the '50s, it is a big ol' sliding board wide enough for 5 or more to slide down together. 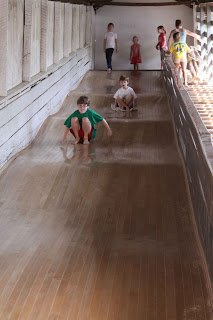 You go even faster if you sit on a burlap sack or even a big sheet of wax paper. But you probably already knew that since you most likely Googled the Rocky Ridge Slide after reading about the accident that happened there on the 17th. But we didn't know any of this before visiting the slide so we just used a fleece car blanket, but it worked amazingly well. 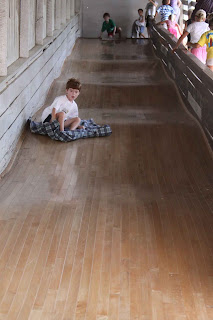 While we there, a nice family of 5 slid down together, head-first, lying on their stomachs, one on top of the other, stacked up by age and size like Frosty the Snowman and his crew. I'm guessing they hadn't heard the news story either.

My boys and K's girls had a great time on the slide. K and I even took a few trips down. We didn't know it at the time but we were all apparently very lucky to come away from the slide with only a few minor friction burns. We learned later that we definitely fared better than one poor child did on the 17th. Thankfully, he is doing well.

The way we learned of the slide incident was an example of synchronicity. On the 20th, my husband was having a work lunch when a coworker mentioned the "freak accident" at the Rocky Ridge Slide. I assume those words were spoken at this precise moment when my son and friend were careening down the slide. 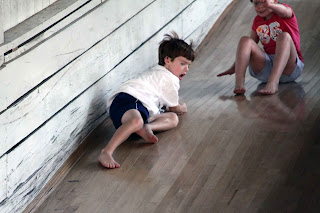 A few short minutes later as we were driving away from the slide, my cell phone rings with my husband on the other end. He asked if we were okay.  Sure, just a few friction burns but the slide rocks! What about the accident? he asks. Huh? So he filled me in.
Interestingly, there were no warning signs around the slide. No caution tape. No notice of the recent accident. Not even a "slide at your own risk" disclaimer. I wonder what type of liability insurance the owners of the slide have.
And even more interesting, there was a crowd of people lining up to hit the slide! This tells me something - the readership of our local paper is down. I missed the story. K missed it. And so must have all those other people who brought their own burlap sacks. And definitely the man who was surfing down the slide in his sock feet missed the news last week.
Strangely though, everyone that I have mentioned our slide visit to has recoiled in horror and said something along the lines of, "I can't believe you were there just after the accident!" Can I ask where were these harbingers of information in the hours leading up to our trip? This would have been useful information to me prior to Friday. Somehow all of my friends, K excluded, knew of the slide story but didn't share. So maybe the overall readership isn't down. Maybe it's just me.