Welcome to our ool. Notice there is no "P" in it.

We are in Tennessee right now visiting the grandparents. As with most trips I make this far down I-81, I get the added bonus of a trip down memory lane. This is where I grew up. This is where many of my "Firsts" occurred. The First that is on my mind right now is My First Job. I started my work life in the Concession Stand at Springbrook Pool. I knew it as Alcoa Pool then. I slung hot dogs and cokes for minimum wage - $3.35/hour in 1981. But it wasn't only the hourly wage I was working for. It was also the social benefits of the job that appealed to me. Working in the Concession Stand offered constant monitoring of Alcoa's summer pulse. Who was going with who.  Who had broken up with who. All this information was to be had at the pool.

The only thing better than working in the concession stand was working in the basket room (if you are from Alcoa and are older than 40, you should know what I am talking about). And better than that was being a lifeguard. At least that what's I think I remember. I could be wrong about all of this and it was merely a boring summer job.

But today Springbrook Pool is offering different things to me. I am watching my own children (too young to work yet) enjoy the pool. They love the HUGE slide. This was not here back in 1981. 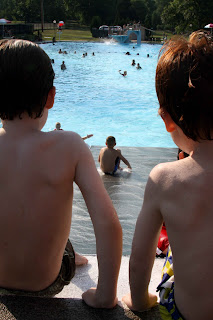 I love that my youngest holds his nose while descending the slide... 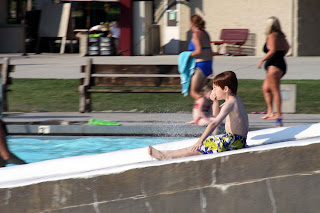 ...only to release his nose with abandon as he enters the water. 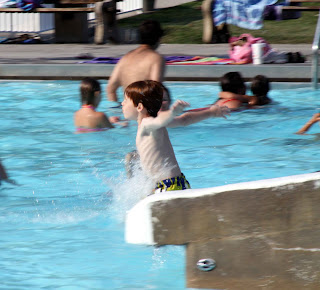 And by the way, we do feed him from time to time.
My older son loves the diving tower. 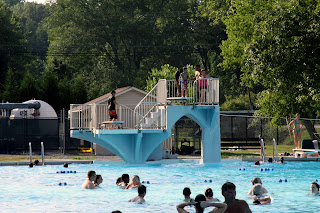 Back in the day, this tower had an even higher level. We called it "Third". 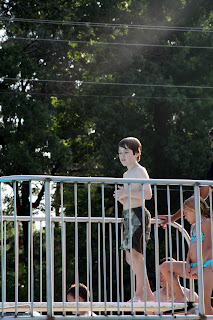 At some point, somebody decided that kids diving off a platform more than 20 feet above the water was not the best idea. So they removed Third and spoiled the fun for everyone. 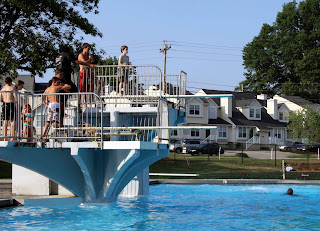 Now the kids can only dive off from 15 feet above the water. That's better. 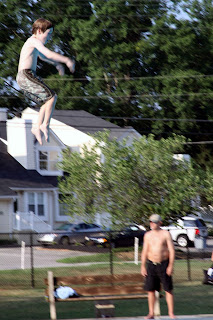 But not nearly as fun as going off Third.
As an adult now, I can appreciate the history and architecture of the pool. The original pool was built in the early 1930s. It has had a few renovations since then, but some of the original features have been preserved. Like this old stone work. 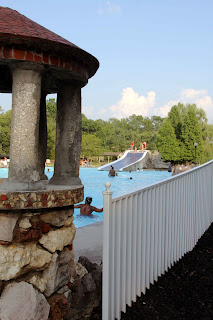 And this stone work offset against the ultramodern arched entryway... 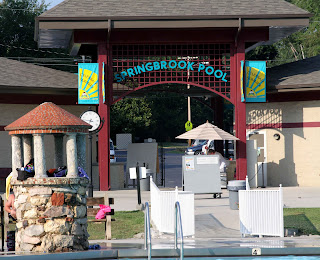 And then there is the piece de resistance... 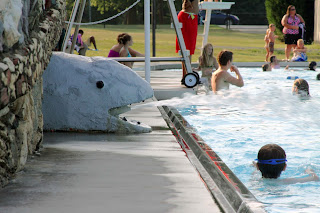 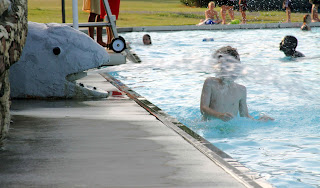 I don't know the history of the eel/fish head but I do know that you will get a guard's whistle directed at you if you try to climb on it. It must be important. It's best to stay off the eel/fish head.
And finally like most good things, this day at the pool must come to an end. Unfortunately this one ended with a sanitary emergency, a 30-minute closing of the pool and a Shock treatment.

As I said before, there's always someone who has to spoil the fun for everyone else.