You've probably heard more than you want to hear about the Blizzard of 2010. And you've probably seen many images of the snowbound digging their way out of the over 3 feet of snow that has been dumped on the mid-Atlantic region. There have been many heartwarming stories of neighbors helping neighbors, folks sharing snowplows and shoveling each others' walks.

But what you haven't heard about yet is how Sticky Chicken is handling this excessive winter weather. Well, being the trooper that he is, he has done his share of snow shoveling just like the rest of us. 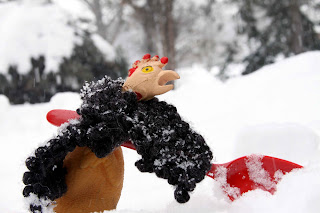 This was a huge feat for him for a number of reasons. First, I don't know how he was able to manage the shovel without thumbs, but he did it! Such an amazing bird. And of course, they don't make snow boots in his size. And even if they did, he wouldn't be able to keep them on due to his physical deformity. (If you are new to Sticky Chicken's story, click here for more information. Talks of forming a foundation are underway as you read this.) But on the bright side, he wasn't freezing his feet off like the rest of us.

Just being outside in this weather is so much harder for Sticky Chicken that it is for us. All he has to wear is a scarf. It serves double duty, keeping his neck warm and settling his somewhat irrational fear of decapitation. I've told him that sort of thing doesn't happen in our neighborhood, but he still worries about being taken by surprise. Aside from the scarf, he is naked. Yep, no feathers. We're not sure how he got plucked since he arrived at our house that way. He isn't forthcoming with the details and I suspect he has some very unpleasant memories of that day. So we've stopped asking. He'll talk when he's ready.

Sketchy past aside, Sticky Chicken still knows how to have a good time. After the shoveling was done, he still had enough energy to build a snowman just his size! 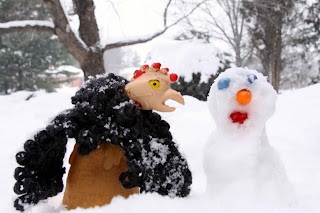