Sticky Lizard, Where Are You? 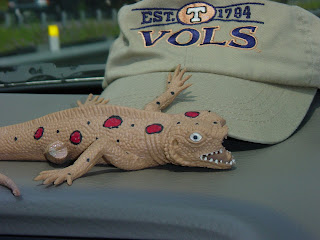 There is legend in our family of Sticky Lizard, a rogue reptile that showed up in surprising places. He arrived one Christmas and bounced from one family to the next for a few years. No one outwardly claims responsibility for Sticky Lizard's movements. But he would be found unexpectedly in a suitcase upon arriving home from a holiday visit. Or an unsuspecting sister-in-law would reach into the dark recesses of her purse to feel Sticky Lizard's tacky hide. The shock and awe always left the finder feeling duped and harboring a strong need for revenge.

Sticky Lizard lived a hard life before he came to our family. His history was truly mysterious but his missing limbs and various puncture wounds led our minds to unhappy places. We bandaged him as best we could, not knowing how the duct tape would affect him but hopeful just the same. Sadly, the time came when Sticky Lizard could no longer be helped. Not to be crass, but his innards became more "outtards" and the duct tape was an affront to his dignity. We buried him one December day under the stones and soil of his East Tennessee beginnings, a river rock as his marker.

Few pictures exist of Sticky Lizard but the few do capture his je ne sais quoi, don't you think? 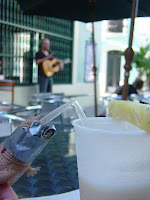 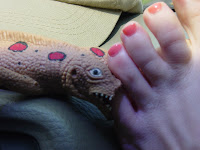 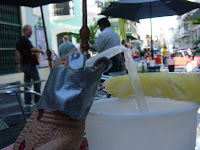 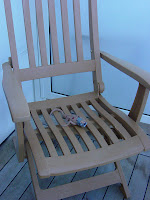 We might be viewed as insensitive to his passing, but nonetheless we replaced him right away. A newer, unblemished version of our fallen Sticky Lizard came to be. This substitute moved between families a few times, but his movements were less frequent than that of his predecessor. Until finally, his travels stopped altogether. Strangely, no pictures exist of Sticky Lizard's replacement. It is fabled that he is in London, but no one knows for sure. Wherever he is, we wish him well and hope to see him yet again. Oh, Sticky Lizard II, where are you?